Title: A Coronation of Kings
Author: Samuel Stokes
Genre: Action/Adventure, Fantasy
Age-Range: 13+ (young adult)
Setting: medieval fantasy world
Publisher: Samuel Stokes
Source: author (in exchange for an honest review)
Rating: 4/5 stars
Content: 3/5. Lots of violence, though it’s not extremely gory at any time. Realistic depictions of war. I wasn’t disturbed by it at all (though I’m pretty hard to unnerve). Mentions of men ‘raping and pillaging’ towns and such. A few kisses (no details). A few bad words (d**n a few times, maybe h**l once or twice; completely unnecessary, but what can you expect?). 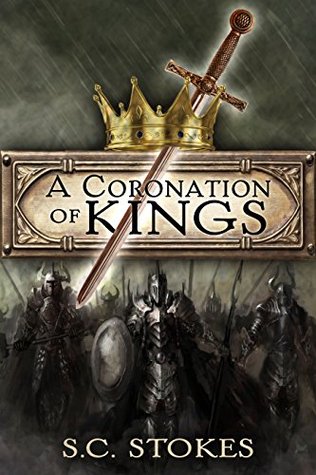 While Tristan may be the heir to the House of Listar, at heart he’s more a lad than a lord.
Mad with power, the ruthless and scheming Baron of Belnair will stop at nothing to gain the crown. In one swift stroke the House of Listar lies in ruin. Alone, Tristan must fight for his life, and his people.

With everything at stake, Tristan must unite the unlikeliest of allies to block the Baron’s ascent. For the first time in his life he must become the leader he was born to be.

The Baron’s armies grow as an ancient magic stirs in the mountains. If Tristan fails, the throne, his freedom, and the love of his life will be lost forever.

The Coronation of Kings by Samuel Stokes is a simply amazing book. I enjoyed it from start to finish. There were a few things, however, that need improvement.
First of all, I would definitely recommend an editor. In every paragraph I was aching to change a thousand little things from word choice to punctuation to grammar to a million little typos. I believe the author could even do a great deal of it himself.
Second, Tristan was a little too … bland. I wish there was more time spent developing his character (and that of his brother as well). He was too perfect, too good at everything, and he had no real character arch. However, I was able to ignore that because, as I said before, this is an amazing book.
At first glance, this is your average story about an heir seeking to reclaim his throne. However, it’s anything but. As mentioned in the summary, Tristan teams up with some unlikely allies. These allies, and their fortress, added something very special and original to this novel. I really want to live in a catacomb now. What? I’m serious! I do! They really had an ideal defense system set up.
From chapter one, this story took off at a fast clip. It rarely seemed rushed, but it was very action-packed. I’m not usually big into those kind of novels (they usually skim on character development, as did this one a bit here and there), but this one was well-done.
Syrion, Tristan’s twin brother, and the stories of the Astarii were fantastic, too. To me, the stories of the Astarii kind of sounded like Christianish … the one about the one Astarii turning away from the gods, the morals, etc. However, I don’t know if this was intended or not. Whether or not some of the tales were supposed to be allegorical, the Astarii and everything about them were an interesting addition to the story. There was a bit of a mystery involved here, and everything came together nicely, just leaving me wondering enough to read on but not confusing me. I especially loved the dragons.
Although Tristian and a few other characters were weak, many characters were not. I found Elaina, Syrion, and Marcus both well-developed, as well as the few ‘thieves’ we did meet and the villains. And the evil creepy lady whose name isn’t coming to mind at the moment.
The setting was really well-done. I felt like I knew the world we were in very well. I enjoyed seeing the different cultures at play on the continent. The description in these cases was fantastic.
Overall, this was an action-packed, breathtaking, twist-filled adventure story that could use just a little tweaking here and there. I can easily see how it could be made a best-seller with a little editing and a little character development.
~Kellyn Roth