After thinking it over for a while, I decided to review A Noble Masquerade by Kristi Ann Hunter in a slightly different way. In honor of the Miranda/Marsh letters, this review will be in epistolary style.
First, a brief introduction the subject material: 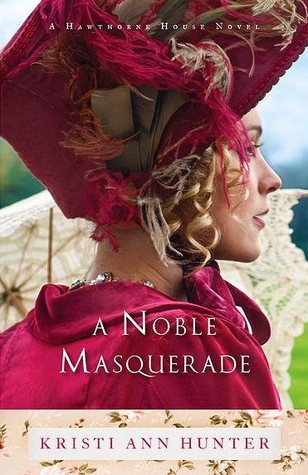 Lady Miranda Hawthorne acts every inch the lady, but inside she longs to be bold and carefree. Entering her fourth Season and approaching spinsterhood in the eyes of society, she pours her innermost feelings out not in a diary but in letters to her brother’s old school friend, a duke–with no intention of ever sending these private thoughts to a man she’s heard stories about but never met. Meanwhile, she also finds herself intrigued by Marlow, her brother’s new valet, and although she may wish to break free of the strictures that bind her, falling in love with a servant is more of a rebellion than she planned.
When Marlow accidentally discovers and mails one of the letters to her unwitting confidant, Miranda is beyond mortified. And even more shocked when the duke returns her note with one of his own that initiates a courtship-by-mail. Insecurity about her lack of suitors shifts into confusion at her growing feelings for two men–one she’s never met but whose words deeply resonate with her heart, and one she has come to depend on but whose behavior is more and more suspicious. When it becomes apparent state secrets are at risk and Marlow is right in the thick of the conflict, one thing is certain: Miranda’s heart is far from all that’s at risk for the Hawthornes and those they love.

Well, your story was quite amusing, wasn’t it? It’s a bit of a comedy (mostly because the very situation with the letters is ridiculous), which I totally wasn’t expecting. Of course, there’s also some mystery and some romance, but the comedy parts were something that stood out to me.

Is it just me, or was “Marlow” a little obvious? The first time he appeared, I was like, “Well, the mystery’s solved; time to close the book …” Of course, I read on though and found a different mystery to solve, but it threw me off for a minute because I was thinking, “Okay … that can’t be it … it’s waaay too obvious!”

It’s kind of nice, like opening a surprise package, so I don’t correct my troublesome ways. Now, your book was like that. A surprise. I started reading it without even glancing at the blurb, and I was kind of bugged by the cover (which seemed a bit off to me … I just feel like the pink, faded, wallpapery trim doesn’t match with the bright dress and hat you’re wearing). So … I was pleasantly surprised.

Now, let’s discuss Marsh. Because I know you want to. 😉 He is absolutely adorable! I mean, you’re adorable together, but even by himself, he’s adorable! I mean, he’s not surpassing Gil (just so you know, Miranda darling, Gil is a friend of mine from a book I beta-read a while back), but Marsh is still pretty awesome!

Moving on to Georgina. Does she drive you crazy? What am I saying; I spent several hundred pages in your head. Of course she drives you crazy! She drives me crazy, too.

Then there are your brothers. Trent was my personal favorite. I love how he slugs Marsh! I mean, I kinda wanted you to hit him … but this was second best. Griffith was also cool, though not in the same way. He’s like a steady rock while Trent is more of a wild ride.

Then there’s your mother. Honestly, she drives me up the wall. I don’t know how you can even bear her. She’s even worse than Georgina. I wouldn’t stand it! You’re a grown woman; who needs her ‘lady lessons’? Eesh. I just wanted to shoot her sometimes.

However, we’ll move on because I bet you don’t want me talking about shooting your mother.

The whole thing with the spies … so thrilling! I mean, in a book. I imagine it wasn’t so fun for you when you were, you know, traipsing about the countryside with the, er, valet.

Anyway, this is an amazing novel, and your author is quite talented. I’m looking forward to reading more by Hunter in the future.