The Painter’s Daughter by Julie Klassen 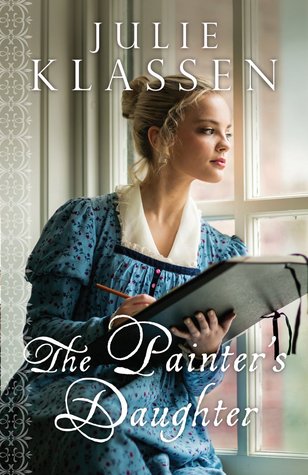 Sophie Dupont, daughter of a portrait painter, assists her father in his studio, keeping her own artwork out of sight. She often walks the cliffside path along the north Devon coast, popular with artists and poets. It’s where she met the handsome Wesley Overtree, the first man to tell her she’s beautiful.
Captain Stephen Overtree is accustomed to taking on his brother’s neglected duties. Home on leave, he’s sent to find Wesley. Knowing his brother rented a cottage from a fellow painter, he travels to Devonshire and meets Miss Dupont, the painter’s daughter. He’s startled to recognize her from a miniature portrait he carries with him–one of Wesley’s discarded works. But his happiness plummets when he realizes Wesley has left her with child and sailed away to Italy in search of a new muse.
Wanting to do something worthwhile with his life, Stephen proposes to Sophie. He does not offer love, or even a future together, but he can save her from scandal. If he dies in battle, as he believes he will, she’ll be a respectable widow with the protection of his family.
Desperate for a way to escape her predicament, Sophie agrees to marry a stranger and travel to his family’s estate. But at Overtree Hall, her problems are just beginning. Will she regret marrying Captain Overtree when a repentant Wesley returns? Or will she find herself torn between the father of her child and her growing affection for the husband she barely knows?

[May contain some little spoilers]

Very good. Well-woven, if a little confusing at times. 🙂 I was absolutely in love with it from beginning to end!
The main plot wasn’t a mystery like most of Julie Klassen’s books … it was a heartbreaking romance. 😀
Wesley Overtree, the man Sophie Dupont loves and was seduced by, runs off, leaving a heartbroken Sophie all by herself … and with child. Captain Stephen, Wesley’s young, steady, considerate younger brother, offers to marry her and erase all the potential scandal from her good name.

Of course, Stephen and Sophie didn’t expect Wesley to come back (and after Stephen had already gone off to war!), insisting that he and Sophie are meant to be together, he shouldn’t be deprived of fathering his child, etc.
So. Annoyingly. Persistent.
Can’t he just give it up and let them be happy together!!!??? Is Sophie going to forget her feelings for Stephen entirely?!? Or is she going to go back to Wesley, that snake????
I was rooting for Stephen from the start. I hated Wesley. Sophie was a little bit blinded to his faults … but I saw through that smooth exterior to a filthy insides! 😉
One last thing: It seems like the plot kinda died about 3/4 of the way through the novel. It just was kinda … hanging on. I pretty much knew how it was going to end, but it kept going on and on and on ….

Stephen was the most amazing Prince Charming ever! I absolutely adored him! 🙂
Sophie was sweet and innocent and fallible. I liked her a lot. At times, her modesty about her painting annoyed me.
Humble people always annoy me.
Of course, so do proud people … you’ve got to have a balance between self-hatred and self-adoration to be a good person. Ok, that sounded better in my head.
I absolutely hated Wesley. Oooooooh, he was such a … a … there is not a decent word that describes him properly!!!
The minor characters, such as Wesley’s misguided, drunkard, crippled war-veteran friend (who went through a wonderful transformation), Stephen and Wesley’s little sister (so spunky and innocent!), Mr. and Mrs. Overtree (a little bit stuffy and legalistic, but very kind after you get to know them), etc. were all well-developed and interesting, most with interesting little back stories of their own, even if it could be a little confusing at times.
But I, personally, like the challenge of keeping track of all the different characters and their backstories.

The writing was wonderful. As always, the romance annoyed me by being a little.
But most contemporary-written romance drives me crazy.
I can stand Jane Austen, Charlotte Bronte, Gene Stratton Porter, Maud Hart Lovelace, etc., but for some reason people now just don’t know when to stop.
Can we stop describing everyone’s emotions and get on the with the plot???!!!
And yes. I am overreacting. It wasn’t that corny. Not as bad as some stuff I’ve read.
But I’m a clone in a human world and I can’t stand much touchy-feely stuff. 😛

It’s advertised as “clean regency romance,” and it is for the most part.
No swearing, some violence (a description of a battle which might be disturbing to some readers, but not terribly graphic), and then, obviously, the main character was pregnant out of wedlock. It was made clear that it was wrong and immoral, but it had happened (and the main character was currently in the process of bearing with the consequences of her mistakes).
There is some romance, but nothing too bad. Overall, it wasn’t too bad. It was an adult book, and I wouldn’t recommend it to anyone under 13 unless you get your parent’s permission. 🙂

5/5 stars! 🙂 An excellent Regency romance book that kept my attention from page one to the end.

Where can you find out more about the book, the author, and her other works?