The Governess of Highland Hall by Carrie Turansky

The Governess of Highland Hall by Carrie Turansky 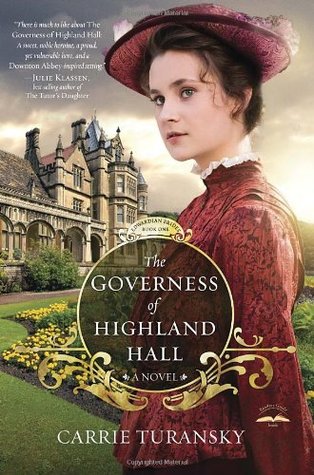 Worlds lie between the marketplaces of India and the halls of a magnificent country estate like Highland Hall. Will Julia be able to find her place when a governess is neither upstairs family nor downstairs help?
Missionary Julia Foster loves working alongside her parents, ministering and caring for young girls in India. But when the family must return to England due to illness, she readily accepts the burden for her parents’ financial support. Taking on a job at Highland Hall as governess, she quickly finds that teaching her four privileged, ill-mannered charges at a grand estate is more challenging than expected, and she isn’t sure what to make of the estate’s preoccupied master, Sir William Ramsey.
Widowed and left to care for his two young children and his deceased cousin’s two teenage girls, William is consumed with saving the estate from financial ruin. The last thing he needs is the distraction coming of a kindhearted-yet-determined governess who seems to be quietly transforming his household with her persuasive personality, vibrant prayer life, and strong faith.
While both are tending past wounds and guarding fragile secrets, Julia and William are determined to do what it takes to save their families–common ground that proves fertile for unexpected feelings. But will William choose Julia’s steadfast heart and faith over the wealth and power he needs to secure Highland Hall’s future?

It’s been a while since I’ve read a light-hearted romance that was not only interesting, but perfectly clean. It was the perfect novel to read after Catching Fire. And the Christian content in the book was so inspiring! Very awesome!

The main character, Julia, was just the right mix of spunk and respectfulness, if you know what I mean. Yes, yes, we all love a spunky heroine … but it really annoys me when girls in historical novels act in ways that would’ve been really scandalous in the era they live in. I think, “Someone hasn’t done any historical research other than read a bunch of trashy historical novels whose authors did the exact same thing research-wise.” But Julia was perfect. 🙂

William was an interesting character. I didn’t like him as much as I’ve liked some other heroes in the past, but he was still nice. He was kind of cold and distant at first, but he had a pretty good reason. A reason I wished the book had dwelled on longer … just because it’s so sad.

I could go into more characters – the vindictive Mrs. Emmitt, the dastardly David, the rebellious Katherine, the misguided Penelope – but I won’t bother. Let me just say they were all amazing and well-developed, and if you want to know more you should read the book yourself!

I don’t know about you, but I always like to get in the heads of as many characters as I can. Don’t ask me why; I just do. In The Governess of Highland Hall, we got into the heads of many characters. Yet the POV switch was very easy to follow and understand. I want to write like that!

The plot was original and interesting. Julia Foster’s just gotten back to England after spending twelve years in India … her father’s ill, and she needs to support her family … she has no choice but to take a job as a governess, although she longs to return to her beloved India.

Sir William Ramsey has recently inherited an estate and title from a distant cousin. He hires Julia as a governess to take care of and educate his two children, Andrew and Millie, and his teenage cousins, Katherine and Penelope.

And so starts the adorable romance.

4.5/5 stars. Just because the end-conflict was too easily resolved.

Hopefully I’ll be able to get a copy of the sequel, The Daughter of Highland Hall, soon! 🙂