The Mistress of Tall Acre by Laura Frantz

A short review for a busy, writing-filled day (or so I hope). And I know some of you find these reviews tedious … but …

The Mistress of Tall Acre by Laura Frantz 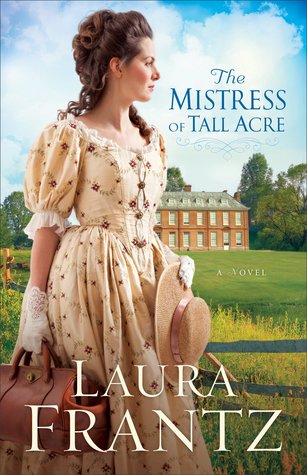 There can be only one mistress of Tall Acre …

The American Revolution is finally over, and Sophie Menzies is starved for good news. When her nearest neighbor, General Seamus Ogilvy, finally comes home to Tall Acre, she hopes it is a sign of better days to come.
But the general is now a widower with a small daughter in desperate need of a mother.
Nearly destitute, Sophie agrees to marry Seamus and become the mistress of Tall Acre in what seems a safe, sensible arrangement.
But when a woman from the general’s past returns without warning, the ties that bind this fledgling family together will be strained to the utmost. When all is said and done, who will be the rightful mistress of Tall Acre?
Triumph and tragedy, loyalty and betrayal–you will find it all in the rich pages of this newest novel from the talented pen of Laura Frantz.

A very good book that gets four stars. I hacked off half a star for content. It made me a little uncomfortable, despite the fact that nothing was really described.

The plot was original and interesting. I admit I didn’t really expect the plot twist, even though it’s basically spelled out for you on the back cover (arg, I hate that! 😀 ). I found it believable for the most part, except for one thing:

Seamus Ogilvie was a slaveholder. And he released his slaves! Now, I definitely don’t agree that slavery was a good thing (BAAAAAAAAAD thing!!!), it was historically unrealistic for him to release his slaves. Trust me, unless he’s Puritan or granted with thinking half a decade ahead of his time, he doesn’t even think they’re completely human. Or just because Sophie wanted him to? Oh, come on! And if he had some miraculous change of heart, there should have been more about said change of heart. It bugged me, although I soon forgot it … the plot was very captivating.

The characters were, for the most part, pretty realistic. I felt like I didn’t learn all that much about the characters except what the other characters were thinking about them. I always feel like character development is skimped upon for POV characters just because the reader is emphasizing with them, and therefore doesn’t need them to be an individual in their mind. *sighs*

Lily Cate, Seamus’s daughter, was amazing. Though at times she felt a bit older than she was, she was a realistic little girl … and so adorable! Honestly, I would want to kidnap her.

The writing was good, with a nice balance between description, action, and dialogue. No nits to pick here. Although, you know, I always find romance corny … unless it’s, like, Jane Austen. Or Charlotte Bronte. Or … well, Charles Dickens, to the best of my knowledge. And two or three of Gene Stratton Porter’s books are good, although she makes the guys waaaay to worshipful of the girls. I always think, “Wow … us girls are really awesome if you talk to Porter’s heroes!” (And … I just now realized I’ve been spelling ‘heroes’ wrong all day! Forgive me! XD )

Back on subject now. The setting was probably one of the highlights of the book. It was very vividly portrayed. I really felt like I was living in the 1700s for a time. Even though I wasn’t familiar with the era – partially because it’s been a while since we’ve studied the Revolution (although I remember most of the facts, I remember barely any details) – I got a good grasp on how everything was. Very good job, Laura Frantz! 😀

Overall, one of the best books I’ve read in a long time. As my friend and I discussed at our last sleepover , reading historical fiction is always very refreshing, and this was no exception. 🙂

3/5. Parental guidance for younger teens suggested for innuendo-ish stuff. Talk about “becoming one,” etc. Granted, it wasn’t always referring to physical oneness, but … still. Creeped me out. Mentions (and even a description) of childbirth. No language, no violence. I might give this a PG-13-ish rating.

p.s. Don’t forget to comment and let me know which character I should interview tomorrow! 😀

Christ-follower, history lover, wife, mom, author. Felt called to write since age 7 and have been writing ever since. My first love is 18th-century fiction, especially colonial history. I feel blessed beyond measure to write books. I hope you are doubly blessed reading them!

Find out more at http://laurafrantz.net/