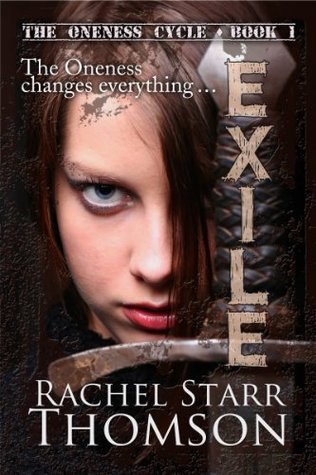 When Tyler fishes the girl out of the bay, he thinks she’s dead. She wishes she was.

For Reese, life ended when the supernatural entity called the Oneness threw her out.

For Tyler, dredging Reese out of the water means life is nothing he thought.

In a world where the Oneness exists, nothing looks the same. Dead men walk. Demons prowl the air. Old friends peel back their mundane masks and prove as supernatural as angels. The Oneness changes everything.

And getting Reese home, making her One again, will change Tyler–and his roommate, Chris, whose connections with the Oneness have been buried most of his life–forever.

It was … interesting. It kind of creeped me out, but not too badly. The whole concept of demon-possession is scary. I know it’s a thing, but … I don’t really want to think about it. The Oneness is a cool idea, though.

Despite that, it was a relatively good book. The plot and characters unfolded and flowed naturally. Good balance of events vs. dialogue vs. description. Overall, the message was good.

The setting could definitely have been fleshed-out more. I wasn’t really sure where we were. In the modern-day world? In the past? In the future? In a world completely different from ours? What’s that world like? It seems modern, but not completely modern. No mention of iPhones, etc., for one thing. 😉

As I find the summary (^) to be a little lacking, I’ll give you a brief description of the plot, which, besides knowing that it’s well-written (which it is except for the setting thing) and free of bad content (which it … pretty much is, though it deals with some disturbing topics and there is some language), is what you want to know about before you consider reading a book. Ok? Ok. 🙂

The story starts when Chris and Tyler, two almost-lifelong friends who live together in a cottage above the sea, drag a heartbroken, suicidal girl out of the ocean. Her name is Reese. After the attack of a demon, she must confess that she is Oneness … no, not that she’s Oneness. That she’s been exiled from the Oneness.

Chris’ mother, Diane, is also Oneness. She doesn’t understand how Reese could be exiled … exiling a Oneness would be like chopping off an arm. All Oneness would feel it. Yet there is something wrong with Reese.

The story goes on, involving kidnappings, battles, traitors, and demons.

Though I’m not a fan of the concept, and the genre definitely isn’t my favorite, Exile is a nice little story that I’d recommend picking up if you like Christian allegory fantasy.

2.5/5, better for older high school teens than younger ones due to violence and an occasional (totally unmerited; I don’t know why they’re there!) cuss word. No sexual content.

Rachel Starr Thomson is in love with Jesus and convinced the gospel will change the world.

Rachel is a woman of many talents and even more interests: she’s a writer, editor, indie publisher, singer, speaker, Bible study teacher, and world traveler. The author of the Seventh World Trilogy, The Oneness Cycle, and many other books, she also tours North America and other parts of the world as a speaker and spoken-word artist with 1:11 Ministries.
Adventures in the Kingdom launched in 2015 as a way to bring together Rachel’s explorations, in fiction and nonfiction, of what it means to live all of life in the kingdom of God.
Rachel lives in the beautiful Niagara Region of southern Ontario, just down the river from the Falls. She drinks far too much coffee and tea, daydreams of visiting Florida all winter, and hikes the Bruce Trail when she gets a few minutes. A homeschool graduate from a highly creative and entrepreneurial family, she believes we’d all be much better off if we pitched our television sets out the nearest window.

This site and its contents copyright © 2018-2023, Kellyn Roth, Wild Blue Wonder Press.
Design by Kellyn Roth.
GOING SOMEWHERE?
Updates: The Lady of the Vineyard and Ivy IntrospectiveKell's Blog
Beyond All Dreams by Elizabeth CamdenKell's Blog
%d bloggers like this: