Title: To Whisper Her Name
Author: Tamera Alexander
Series: A Belle Meade Plantation Novel, #1
Genre: Christian Historical Romance
Age-Range: young adults/adults
Era: late 1860s
Setting: Kentucky, USA
Publisher: Zondervan
Source: library
Rating: 3/5 stars. If I were just rating the characters, writing, and the main plot, I’d give it five stars, but there were a few things that took away those two stars.
Content: 2.5/5. A lot of attraction between Olivia and Ridley … which made me kind of uncomfortable. Will you please stop staring at each other??? Not much violence, no swearing. Overall, relatively clean. 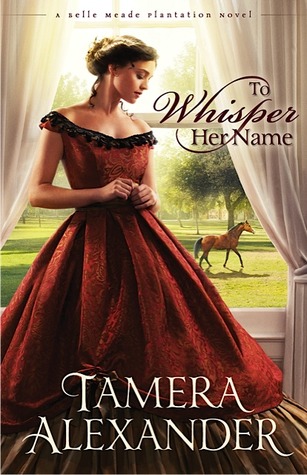 Set at Nashville’s historic Belle Meade Plantation, the most influential thoroughbred stud farm in America’s history, To Whisper Her Name weaves the struggles of real people of the post-war South with the journeys of a man and a woman scarred by betrayal.

Olivia Aberdeen, destitute widow of a man shot as a traitor to the South, is shunned by proper society and gratefully accepts an invitation from “Aunt” Elizabeth Harding, mistress of Belle Meade Plantation. Expecting to be the Harding’s head housekeeper, Olivia is disillusioned when she learns the real reason Elizabeth’s husband, Confederate General William Giles Harding, agreed to her coming. Not finding the safe haven she expects, Olivia is caught off guard by her feelings for Ridley Adam Cooper, a Southern man who seems anything but a Southern gentleman.

Branded a traitor by some, Ridley Cooper, a Southern son who chose to fight for the Union, is a man desperate to end the war still raging inside him. Determined to learn “the gift” that Belle Meade’s head horse trainer and former slave, Bob Green, possesses, Ridley harbors secrets that threaten both their lives.

As Ridley seeks to make peace within himself for “betraying” the South he loved, Olivia is determined to never be betrayed again.

Buy on Amazon  ~ Add to Your Goodreads

I could go on about the complete awesomeness of the setting for hours! To begin with … IT WAS A HORSE FARM!!! THERE WERE HORSES!!! Second off, it was in the South, during the Reconstruction era! And the writing fit the setting perfectly. I can honestly say that I spent several days at Belle Meade Plantation. 😉
I will DEFINITELY read this novel again, but it could have been better.
~Kellyn Roth