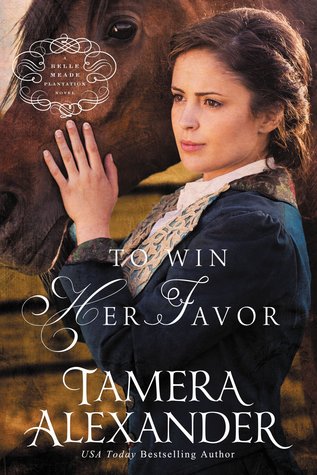 A gifted rider in a world where ladies never race, Maggie Linden is determined that her horse will become a champion. But the one man who can help her has vowed to stay away from thoroughbred racing for good.

An Irish-born son far from home, Cullen McGrath left a once prosperous life in England because of a horse racing scandal that nearly ruined him. He’s come to Nashville for a fresh start, hoping to buy land and start a farm, all while determined to stay as far away from thoroughbred racing as possible. But starting over proves harder than he’d wagered, especially when Maggie Linden’s father makes him an offer he shouldn’t accept yet cannot possibly refuse.

Maggie is certain that her mare, Bourbon Belle, can take the top purse in the annual Drayton Stakes at Nashville’s racetrack––the richest race run in America. Maggie only needs the chance to prove it. To give her that chance, and to save Linden Downs from being sold to the highest bidder, Maggie’s father––aging, yet wily as ever––makes a barter. His agreement includes one tiny, troublesome detail––Maggie must marry a man she’s never met. A man she never would have chosen for herself.

Cullen and Maggie need each other in order to achieve their dreams. But their stubborn, wounded hearts––and the escalating violence from a “secret society” responsible for lynchings and midnight raids––may prove too much for even two determined souls.

I really identified with Maggie Linden. I often feel that way about horses; I just have to be around them! She was an admirable character who acted realistically to each situation she was placed in, while saying true to herself (most of the time). I liked her a lot, but not as much as I liked Cullen McGrath.
Ah, Cullen! His background – an Irish immigrant – was enough to make me fall in love … and he had other admirable qualities, too. I especially liked that he kept his end of whatever bargain he entered into. One the other hand, it annoyed me how long it took him to tell Maggie his secret. And even then, a big deal wasn’t made out of it.
Mr. Linden was an amazing character! I really liked him. Such a wise, strong, gentle man.
Kizzy was an angel!
Good to see some of the characters from To Whisper Her Name, such as a much nicer Mary Harding, and General Harding, with his beard still growing. I was disappointed not to hear more about the Coopers, though it was mentioned that they got their ranch in Colorado.
The villains were hateful! Especially Drake! GO DIE IN A HOLE, DRAKE!!!
I can’t wait to read To Mend a Dream, a novella about minor character Savannah Darby.

The plot was interesting, and the touchy era was tastefully managed. It was well-paced and never dragged.
And it was so nice to have someone finally mention how mistreated Irish immigrants were!

Can I please have a time machine and a train ticket to Nashville? I WANT TO GO LIVE THERE!!!
~Kellyn Roth

This site and its contents copyright © 2018-2023, Kellyn Roth, Wild Blue Wonder Press.
Design by Kellyn Roth.
GOING SOMEWHERE?
To Whisper Her Name by Tamera AlexanderKell's Blog
Beyond All Dreams by Elizabeth CamdenKell's Blog
%d bloggers like this: