The Movement of Kings by Nadine C. Keels

The Movement of Kings by Nadine C. Keels 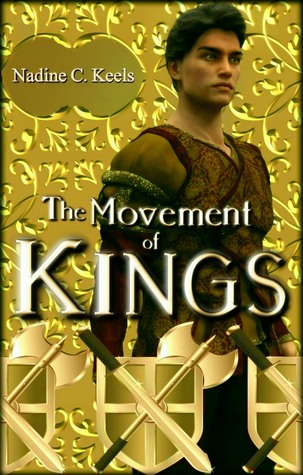 The order of things, the nature of succession, and a nation that must march on…
At a time of political and cultural uncertainty, the charge of the Eubeltic Realm has been passed over to a young monarch known for his intelligence, agility, and brooding ways, as well as the “way” he has with vibrant ladies at court. Can this inexperienced king handle the current rise of domestic and colonial crises, the bereavement of his family, and his curious attraction to a councilman’s unassuming daughter, or is everything in his untried hands on the verge of falling apart?

This was my favorite of the Movement of Crowns series. I really enjoyed it, as you can see by the five-star rating. I’d recommend it to any lover of non-magical fantasy, clean romance, and an exciting plotline.

I was a little disappointed by the time skip between Rings and Kings. But I soon got over it (like … after the first page …), the same as I got over the death of my favorite character. Kings was well-written and well-plotted. I liked the story – that of a young man trying to take the place that’s been set out for him despite his inexperience and the fact that this wasn’t supposed to happen yet.

I really loved the characters. Of course Alexander was cool (I totally sympathized with him), and I can tell that Prince Joshua is going to be an awesome person.

I adored Vale! She was just so sweet and kind and understanding, and while she was uncertain, she wasn’t annoying uncertain. You know, like those stupid characters who are like “I’mnotgoodenoughIcan’tdoitI’mawimpstopreadingaboutmeaaaaah.” They drive me nuts. Vale wasn’t at all like that. 😛

Anyway, the politics were awesome. Alexander is just so smart. Can we bring him to the US and make him president? I mean, Trump is cool, but Alexander would be great. Maybe even a little better.

The conflict in the Eubeltic Region was very realistic, and I love how he handled it.

So … go buy this book! Seriously! I suppose you can read the first ones before you start this one if you want … but save this one to read on a day when you have plenty of time for reading. Because you won’t be able to put it down. 😀

This site and its contents copyright © 2018-2023, Kellyn Roth, Wild Blue Wonder Press.
Design by Kellyn Roth.
GOING SOMEWHERE?
The Movement of Rings by Nadine C. KeelsKell's Blog
To Middle (To Write or Not To Write, #1)Kell's Blog
%d bloggers like this: