Bees in the Butterfly Garden by Maureen Lang

Bees in the Butterfly Garden by Maureen Lang 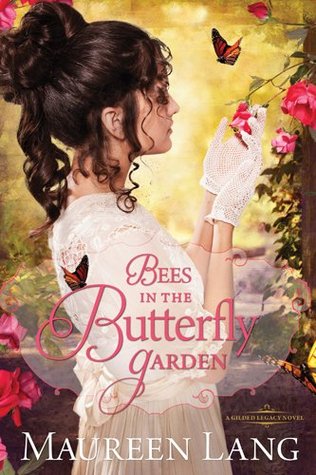 Raised in an exclusive boarding school among Fifth Avenue’s finest, Meg Davenport has all she’s ever needed . . . but none of the things she’s wanted most, like family or dreams of a future that include anything other than finding a suitable match. So when her distant father dies, she seizes the chance to throw etiquette aside and do as she pleases. Especially when she learns that John Davenport wasn’t the wealthy businessman she thought, but one of the Gilded Age’s most talented thieves.
Poised to lead those loyal to Meg’s father, Ian Maguire knows the last thing his mentor would have wanted is for his beloved daughter to follow in his footsteps. Yet Meg is determined, and her connections to one of New York’s wealthiest families could help Ian pull off his biggest heist yet. But are they both in over their heads? And in trying to gain everything, will they end up losing it all?

Wow. I’ve heard ‘don’t judge a book by it’s cover’ often enough to heed the warning, but … eesh. I never expected it to be so accurate. This novel has a lovely cover, but it is not a very good book. It’s boring.
Of course, I guess I couldn’t have known that unless I actually read the book. The summary makes it sound so awesome! But, in fact, it’s not.
Why isn’t this a good book? Well, I can’t pinpoint an actual reason. I suppose it was a lot of things.
The plot is a good idea; the characters could have been interesting. But it was written in a way that was dry and boring and the characters never caught my attention at all. I didn’t care for them one bit. I was glad to be done with their story!
I was sorely tempted on several points just to put the book down. In fact, it took me weeks to read it, whereas most books of this genre take me about a day!
A few things I did like about this book: the little ‘Madame Marisse’ quotes at the beginning of each chapter and the glimpse of Fifth Avenue social life. This novel was obviously thoroughly researched, and I commend the author for that.
I also enjoyed the minor characters Claire and Evie. Kate was also okay, though annoying.
I’ll stop talking about this dull, somewhat annoying book now. Just be warned that it’s probably not worth slaving through it unless you’re super bored like me. 😉
~Kellyn Roth