Title: The Exiled Seven
Author: Blake Renworth
Series: The Exiled Series, #1
Genre: Adventure Fantasy
Age-Range: 14+ (young adult/adult)
Publisher: Inglenook Publishers
Source: publisher (in exchange for honest review)
Rating: 4/5 stars
Content: 3/5. Younger teens cautioned for violence (nothing too gory) and a little cussing (which seemed a little random to me, by the way … like it was thrown in for no particular reason).
Cover: 5/5. This one is really pretty! I especially like the font of the title. 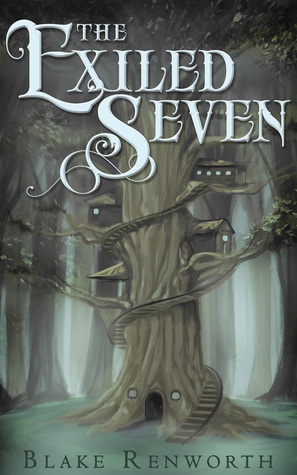 When Alariq is exiled from his home city-state for a crime he did not commit, only six stand by his side, convinced of his innocence and steadfast in their loyalty.
The seven dwarfs must set out from Ishtara to look for a new place to call home, but in doing so, they make a discovery that puts them all in danger. They are rescued and taken in by a mysterious and beautiful outsider, who lives alone in the depths of Loraheem Forest. What follows is Alariq’s struggle to come to terms with his exile, as those around him seek to make a place for themselves in this new life. Soon, however, it becomes clear their situation is more complex than they initially realized, and they begin to wonder if there is more behind Alariq’s exile than simply being in the wrong place at the wrong time.
Told in a unique storyteller voice, this reversal and reimagining of the classic fairy tale explores the themes of shattering betrayal, the subsequent struggle to trust again, and the basic desire to take control of one’s own destiny.

The Exiled Seven was one of those books I went into not exactly sure what I was getting … probably because I always forget to reread summaries and other info before I begin reading! For some reason, I thought it was middle-grade fiction (maybe I got that impression from the cover or I was thinking of another book …), but it’s more young adult/adult based on reading level and content, I think.
The story started out a bit too slowly for my taste. There was a little more info-dumping than I’d prefer. Perhaps I would have started the book a bit earlier to save some of the explanation … but that’s the author’s decision, of course. There were certain things about the plot that didn’t make sense to me, too.
Let’s move on to positivity, now, because, as you can see, this is a solid four-star book, and so I must have good to say about it! 🙂
First, I have to say this is an extremely original twist on the Snow White story! It takes it to a whole new level. I was very pleased, although I’m hoping there will be more elements of the original fairy tale in the next story (I always love that kind of thing!).
After it got going, the plot was well-paced and, though sometimes I didn’t quite get everything, I enjoyed it.
I was really frustrated when the book ended (in a good way!). I was hoping to figure some things out before it ended … talk about a cliffhanger! Hopefully, though, I’ll be able to read the next book this spring!
The characters were pretty good. I got the dwarves mixed up a few times, but other than that, I kept them separated and was impressed with their individuality.
Tiana was pretty amazing; my favorite character, in fact. I really enjoyed her. I need to find out all the details of her life … it’s driving me crazy!
I must say, Alariq was pretty likable despite his unlikability. He was a really good leader, and he usually didn’t make the stupid decisions I hate in adventure novels.
It took me a while to get a hold on the world. The names of different places kept getting mixed up in my head! Eventually, though, I got it sorted out, as with the dwarves.
The interesting voice was very entertaining and clever. I admit I felt as if the narrator disappeared leaving the telling of the story to Alariq after a few paragraphs at the beginning of each chapters, but that wasn’t a problem at all.
Now, I must take a moment to compliment the author’s description. It was nothing short of fantastic! I felt as if I were standing right beside Alariq, seeing and feeling and smelling and hearing the same things he was. It was great!
Overall, this is a thrilling fantasy novel I’d recommend to any young adult through adult reader who loves exciting adventure with lots of drama and even a little humor thrown in.
~Kellyn Roth