Title: The Fire
Author: John A. Heldt
Series: Northwest Passage, #4
Genre: Time Travel Adventure/Romance
Age-Range: 13+ (upper young adult/adult)
Era: 2000s/1910s (Contemporary/Edwardian)
Setting: Northwest America
Publisher: John A. Heldt (self-published)
Source: from author (in exchange for honest review)
Rating: 3/5 stars
Content: 3/5, not recommended for anyone under thirteen. Mild language, only occasionally. Some violence/death/thematic elements, but nothing gory or frightening. (SPOILERS NOW) I expected there to be another out-of-marriage sex scene, but there was more description this time (it was very no-details and fade-to-black in the last two books I read by Mr. Heldt, and although it wasn’t very detailed and it didn’t go too far … still not a fan). I was disappointed. Also, they didn’t get married, although they would have if they could have. There were also several mentions of visits to prostitutes, and one of the main characters would have become a prostitute, but she was rescued before she actually … *awkwardness* (END OF SPOILERS) 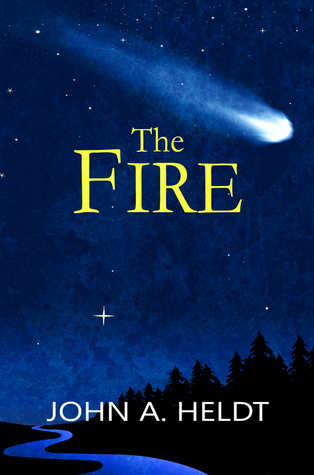 When Kevin Johnson, 22, goes to Wallace, Idaho, days after his college graduation, he expects to find rest and relaxation as his family prepares his deceased grandfather’s house for sale. Then he discovers a hidden diary and a time portal that can take him to 1910, the year of Halley’s comet and the largest wildfire in U.S. history.

Within hours, Kevin finds himself in the era of horse-drawn wagons, straw hats, and ankle-length dresses. Returning to the same time and place, he decides to travel again and again and make the portal his gateway to summer fun. The adventure takes a more serious turn, however, when the luckless-in-love science major falls for pretty English teacher Sarah Thompson and integrates himself in a community headed for tragedy.

Filled with humor, romance, and heartbreak, THE FIRE, the sequel to THE JOURNEY, follows a conflicted soul through a life-changing journey as he makes his mark on a world he was never meant to see.

I was disappointed by The Fire. Now, don’t get me wrong! It was a splendid novel … but it just wasn’t quite as good as The Mine and Indiana Belle.
I’m just gonna get my negatives out of the way now:

There! That’s all. Perhaps you think that’s not enough to move it from four stars to three, but I’m just giving my honest opinion.
The characters were very well-developed and realistic; the writing was pretty good. I’ve always really like Heldt’s comparisons. I have to say this because I read a review in which the reviewer commented that she didn’t particularly care for the similes, and they were often stupid or insulting. For instance, “The place was as empty as the head of a homecoming queen.” Maybe insulting, but true. 😉
Overall, this was a decent novel, but if you really want good reading, Indiana Belle would be my personal John A. Heldt recommendation.
~Kellyn Roth