Young Marian: A Viper in the Forest by Mandy Webster

Title: A Viper in the Forest
Author: Mandy Webster
Series: Young Marian, #1
Genre: Historical Adventure (folk-tale retelling)
Age-Range: 10+ (middle grade/young adult)
Era: medieval
Setting: Sherwood Forest, England
Publisher: Mandy Webster
Source: from the author (in exchange for an honest review)
Rating: 5/5 stars
Content: 3/5. Some violence (swordfights, fistfights, etc.), nothing too gory, but people were stabbed and bleeding, etc. A mention or two of childbirth and women dying during childbirth, no details, should be okay for younger kids. I don’t remember any language.

A Viper in the Forest by Mandy Webster 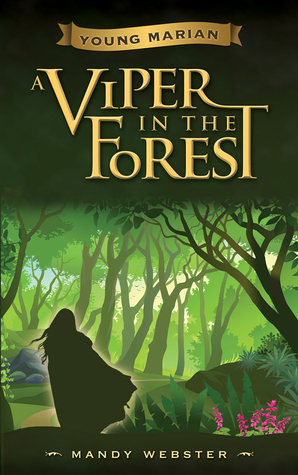 Marian and Robin’s carefree childhood in Sherwood Forest takes a dark turn when the arrival of a cruel new lord sets off a series of intrigues including robbery, kidnapping and murder.

Marian watches in horror as the man strides, weapon in hand, toward where Robin lies helpless. But when Robin’s plan to exact vengeance goes awry, Marian must risk her own life to save him.

A rash of robberies has been plaguing the great houses of Nottinghamshire. Knowing what she does about him, Marian is forced to ask herself whether Robin is capable of the crime spree or if his was just a one-off act of revenge.

Marian’s attempts to uncover the truth lead her into the path of the handsome young Guy of Gisbane – and danger. Kidnapped and hopelessly lost in the forest, Marian has only her wits to rely on if she and Robin hope to survive.

Wow, that was really a fantastic book! I’m considering buying a copy for my younger (12-year-old) brother for Christmas. I think he might like it, especially since my mother’s reading The Adventures of Robin Hood to him now. I think my nine-year-old brother might enjoy it, too.
This is an amazing retelling (or rather prequel) of the Robin Hood story. Told from thirteen-year-old Maid Marian’s point of view, A Viper in the Forest tells the story of Robin and Marian’s first escapade (at least, I assume this was the first one that put them in danger of anything but a whipping!).
Let me tell you, I sure didn’t see any of the twists coming! I was always surprised. Maybe that’s because I’m naïve and gullible, or maybe that’s because it’s an amazing book. You’ll have to buy it and judge for yourself.
The characters were well-developed. I liked Marian, although I admit her distrusting Robin for an instant bugged me a big (despite the fact that I had my suspicions, too). She was a very strong character. Of course, I never had a problem with the damsel-in-distress Marian. In fact, I liked her. I don’t know why, but I don’t feel like being rescued makes you weak, especially if you’re wearing a dress. I always feel weak in a dress. 😛
Sorry for my weird musings. I’ll get back to the review.
Anyway, it was nice to see Marian in the strong-female-lead place, although I admit it annoyed me just a bit because girls weren’t like that back then. I don’t care what you say; girls weren’t like that back then! Still, that didn’t subtract from my enjoyment of the book at all, because the Robin Hood story has always felt like more of a legend than a reality to me, and so I view this book more of fantasy than historical fiction.
Robin was great, though he wasn’t the Robin we’re used to. He’s rasher, crazier, not so self-controlled … but, then, he is fourteen. Fourteen-year-old boys can be … *shivers* I do hope he becomes a little more balanced as he grows … though not a lot.
Midge was another favorite, and I liked Marian’s father a lot, too. I absolutely hated Guy (what? I just felt like he was oily … I know nothing was proved, but … maybe I share Robin’s anger and jealousy of him a bit or something, but he creeped me out). But it was a good hate (if you know what I mean!).
The description was lovely, and the setting was beautifully unfolded. I absolutely loved Robin’s treehouse! I want a structure just like that, with all the ropes and stuff … wow. So cool.
This is an exciting, adventurous, twistful tale that anyone, male or female, over the age of ten is sure to enjoy. If you buy it, remember to set aside a weekend, because you will not be putting it down.
~Kellyn Roth