Title: Class of ’59
Author: John A. Heldt
Series: American Journey, #4 (can be a stand-alone, too)
Genre: Time Travel Adventure/Romance
Age-Range: 14+ (young adult/adult)
Era: contemporary and 1959
Setting: California
Publisher: John A. Heldt
Source: from author (in exchange for honest review)
Rating: 4/5 stars (.5 removed for content)
Content: 3/5. A few cuss words, d**m a few times and I think maybe h**l once. Some violence (someone is shot with a gun, mentions of blood, nothing graphic at all). As far as sexual content … let’s just say we stayed out the bedroom, but there was some, er, extra-marital activities that weren’t described (past kisses and stuff). Fade-to-black, but we still know it happened and … yep. That’s why I don’t recommend it to anyone under 14. 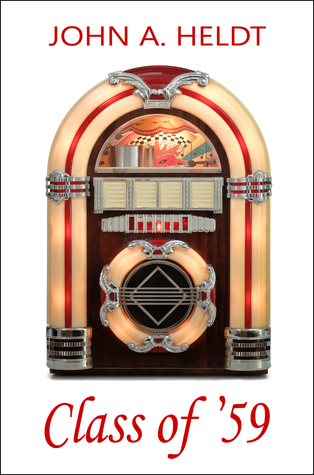 When Mary Beth McIntire settles into a vacation house on June 2, 2017, she anticipates a quiet morning with coffee. Then she hears a noise, peers out a window, and spots a man in 1950s attire standing in the backyard. She panics when the trespasser sees her and enters the house though a door to the basement. She questions her sanity when she cannot find him.
In the same house on March 21, 1959, Mark Ryan finds a letter. Written by the mansion’s original owner in 1900, the letter describes a basement chamber, mysterious crystals, and a formula for time travel. Driven by curiosity, Mark tests the formula twice. On his second trip to 2017, he encounters a beautiful stranger. He meets the woman in the window.
Within hours, Mary Beth and Mark share their secret with her sister and his brother and begin a journey that takes them from the present day to the age of sock hops, drive-ins, and jukeboxes. In CLASS OF ’59, the fourth book in the American Journey series, four young adults find love, danger, and adventure as they navigate the corridors of time and experience Southern California in its storied prime.

Well, that was great! I was a little worried that I wouldn’t like it because I always feel bad after giving a bad review … even if my last review of one of Mr. Heldt’s books wasn’t exactly bad, I had some bad things to say about the book. But I really enjoyed Class of ’59 (as you know if you’re my mother and scolded me in the morning for being up at two …).
Anyway, this book breaks the formula I was kinda starting to see in John A. Heldt books. For instance, we’re seeing the story for two couples’ perspectives … four people who are main characters instead of one. Very nice. Also, we’re seeing the time-traveling, originally, from someone living in the past’s perspective. Really neat. I liked that.
The plot was relatively well-paced and interesting. I enjoyed the setting a bit more than I thought I would (I found it really interesting, if a little … more modern than I’m used to, I suppose), and I was already thinking I’d like it a lot. Honestly, I don’t like to go much past the early ’50s in novels, so this was pushing it for me. But I really liked it. I especially enjoyed the descriptions of school in the late ’50s. And the tennis match … that was my favorite part. 🙂
For some reason I was envisioning a mixture of That Darn Cat, Grease, and my grandma’s young adulthood in my head the whole time I was reading this book. It was pleasant , and I’m glad I read it.
Now, the content was a little more than I prefer, but I managed to switch my mind to ‘Okay, I’m watching Grease at the moment, and I need to try ignore the content because  Olivia Newton-John is cute …’ and fast-forward during those parts. 😉
The characters were interesting and unique. I think my favorite was Mary Beth. Or Piper. Definitely Piper. Wait,  I like Ben, too. And Sally …
Which reminds me; not finding out about Sally was one of the  reasons (other than content and the fact that it made me stay up too late XD ) I didn’t give this novel 5 stars. How do I know how she ends up?
So, if you’re an older teen/adult (see content section) and you love time-travel romances with a generous dash of adventure, grab a copy of Class of ’59, John A. Heldt’s most recent (September, to be exact) release today!
~Kellyn Roth