Title: Austenland
Author: Shannon Hale
Genre: Contemporary Romance
Age-Range: 14+ (young adult/adult)
Era: contemporary
Setting: New York, USA and England
Publisher: Bloomsbury
Source: library
Rating: 4/5 stars
Content: 3.5/5. It’s been a while, so I don’t remember exactly. Some cussing, but extremely rare … and unnecessary in my opinion. I just remember one or two words. A little sexual content – mostly in form of mentioning stuff that could be taken inappropriately, a little innuendo, and then kissing (not extremely detailed). There were also three mentions of gay people. Never says what that is or goes into more detail about it. Mentions of adultery, and it’s hinted that several of the stayers at the result (they’re all female) have husbands. No violence. Not recommended for readers under 14. 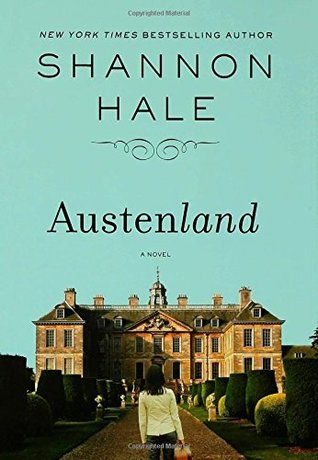 Jane Hayes is a seemingly normal young New Yorker, but she has a secret. Her obsession with Mr. Darcy, as played by Colin Firth in the BBC adaptation of Pride and Prejudice, is ruining her love life: no real man can compare. But when a wealthy relative bequeaths her a trip to an English resort catering to Austen-crazed women, Jane’s fantasies of meeting the perfect Regency-era gentleman suddenly become realer than she ever could have imagined.
Decked out in empire-waist gowns, Jane struggles to master Regency etiquette and flirts with gardeners and gentlemen; or maybe even, she suspects, with the actors who are playing them. It’s all a game, Jane knows. And yet the longer she stays, the more her insecurities seem to fall away, and the more she wonders: Is she about to kick the Austen obsession for good, or could all her dreams actually culminate in a Mr. Darcy of her own?

Well … hmm. It was a great book, but there were also a couple things that were not so good. The content, for one. It wasn’t awful (it was better than the very worst Gilmore Girls episode, for my mom’s sake), but it was still there. And unnecessary.

Then I found the writing a bit immature, and the romance was just a wee bit cheesy at times. Also, falling in love with Mr. Darcy does not make you a lesser human being, as Jane seems to think. It makes you a little crazy (KNIGHTLEY GUYS KNIGHTLEY!!! THERE’S SOMETHING WRONG WITH EVERY AUSTEN HERO BUT KNIGHTLEY!!!!!!!!), but not a lesser human being. 😉

Other than that, the book was amazing.

The plot, the characters, the setting … all well-developed and original. I especially liked the concept … a place where you can go to dress up like a Regency bell, enjoy the empire-waist gowns and meet the dashing gentlemen (or are they … actors?) of that time. Is anything real at Pembrooke Park, or it all just Jane’s imagination?

But, of course, I’m obsessed with Mr. Knightley, not Mr. Darcy. And I’ve never actually gotten through the Colin Firth Pride and Prejudice. 😛 I love Keira Knightley unconditionally, no matter what. I don’t care what people say. She is the perfect Elizabeth Bennet.

Anyway, overall, it was a great book. I don’t know why, but it reminded me of Gilmore Girls (chick flit) crossed with your less-awesome “historical” romance novel (usually also a chick flit and sometimes pretty slack on the “historical” part!). However, I did enjoy it (didn’t put it down for a long time!) and would recommend it for older young adults/adults.