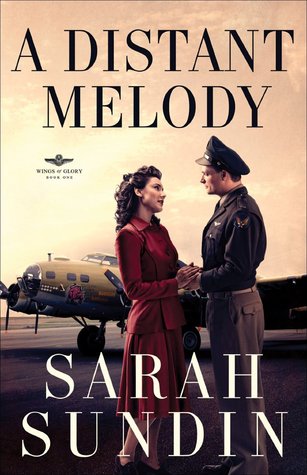 Never pretty enough to please her gorgeous mother, Allie will do anything to gain her approval–even marry a man she doesn’t love. Lt. Walter Novak–fearless in the cockpit but hopeless with women–takes his last furlough at home in California before being shipped overseas.

Walt and Allie meet at a wedding and their love of music draws them together, prompting them to begin a correspondence that will change their lives. As letters fly between Walt’s muddy bomber base in England and Allie’s mansion in an orange grove, their friendship binds them together. But can they untangle the secrets, commitments, and expectations that keep them apart?
A Distant Melody is the first book in the WINGS OF GLORY series, which follows the three Novak brothers, B-17 bomber pilots with the US Eighth Air Force stationed in England during World War II.

Simply fantastic story. I can’t get over it. I just loved it to death. Now, time to explain why A Distant Melody is now among my favorite novels ever. Not that I’ll be able to describe it in words, of course. You’ll just have to read the book and join my shrill fangirl shrieking. *dances happily*

Now, I just expected to read another sweet, light historical romance with a tiny bit of Christian faith. Was I ever surprised! The Christian message is strong! REALLY strong. Yet it’s not preachy. It’s amazing. Sundin didn’t bleach the truth; she handled it straightforwardly, never wincing at the way things are.

The romance … adorable. I loved how, although Walt and Allie were physically attracted to each other (healthily; more on that later), neither of them were described as handsome/beautiful. Quite interesting. They really had a solid friendship before they moved on to romance. They depended on each other, they knew each other, they were awesome together … *grins* I’m just so happy thinking about this book right now. 😀

Before I go any farther, a bit about the content (as promised):

I felt like I had to content-rate this 3/5 although it just didn’t feel unclean! It was a very sweet book, and everything that was wrong (even little white lies/not telling the whole true being a lie) was dealt with exactly as it should be, and wow! Just wow.
Walt was attracted to Allie (and visa-versa, I think; I don’t remember exactly), but he wasn’t gawking at her all the time; he was healthily attracted to her, I’d say. That’s really the first time I’ve seen that in a book. I was like, “Wow … that’s cool!” A few kisses, but nothing that made me squirm.
Also, there’s some gossip about Baxter (that he might be homosexual) that is never exactly disproved, though Allie is sure it’s not true; it’s just gossip. No language. Some violence; nothing really graphic, but it might disturb the weak-hearted.

Back to the actual story.

Time to talk about characters. You know how I feel about characters, guys. I love ’em. I adore ’em. But I rarely find characters that satisfy my needs! These guys did. Walt, Allie, Frank, and every other character in this book was amazing. They were very real people, none of them completely perfect, none of them (except Baxter, maybe) completely evil.
I especially felt bad for Allie. I think it’s best if you read this book not knowing a ton about it (it’s one of those books that unfolds best if you don’t know a ton about it when you start reading), but I emphasized with her every step of the way.
And Walt … I don’t really have a problem with lying (not even “little white” ones) … but this still touched me. I do stretch the truth sometimes, I guess, come to think of it, but I’m a storyteller. What do you expect?

More than anything, this is a story of character growth – growth in personality, growth toward God, etc. Not that the romance wasn’t fantastic … but the character growth was the coolest part.
If you don’t like character-based stories, that’s okay. This is a fantastic adventure story. We spend a lot of time in England, flying over France, almost dying, etc. I was so proud of knowing a bit about bombers due to a story my friend wrote. I was all like, “I don’t need to read this paragraph describing the plane! I already know what it looks like! HA!!!” 😛
Overall, I would recommend this book to any teen/adult who loves WW2, romance, adventure, the ’40s in general (research for both the ’40s as an era and WW2 was amazing, by the way! Sundin captured the ’40s!), bombers, action, a strong Christian message (that will change the way you think), touching stories, occasionally funny stories, sweet stories, or just trusts me to know a good book when I read it! 🙂
~Kellyn Roth