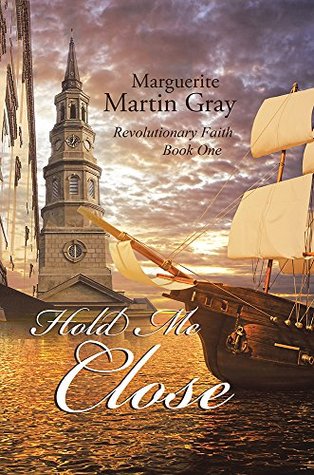 Louis Lestarjette, a Frenchman, arrives in Charles Town, South Carolina, in 1772 without purpose or plans. He encounters a society on the brink of revolution and is forced to make decisions that include finding meaning and direction in his carefree life. Who can he trust in his endeavors to prosper? Will he be able to stay neutral in a battle for independence? When decisive events confront him, will he stay or leave? Running from God and commitment is a constant option.

Elizabeth Elliott, daughter of a prominent British citizen, believes God will hold her close in uncertain and changing times. Faced with making difficult decisions about her loyalties, she finds comfort in close friends, a devout sister, and her music. When the mysterious Frenchman with no commitment to God or Charles Town enters her life, her role in the political battle is challenged. Can she trust her heart in volatile situations?

Set in pre-revolution Charles Town, Hold Me Close takes the reader into the lives of immigrants, ordinary citizens, and prominent historical figures at a time in which decisions are made that will change the world.

Wow. That was really a fantastic novel. Great plot, great characters, great message. I really loved it, but there was a lot of showing instead of talking and several awkward sentences. It increased my enjoyment of the book at times just because the writing wasn’t smooth. Other than that, though, I have nothing to do but sing this book’s praises.
The plot was entertaining, exciting, and well-paced. I really loved seeing both sides of the story. Both the Loyalists and the Sons of Liberty have points … but, of course, the Sons of Liberty were right. The way England treated its colonies was wrong. Especially considering what great folks we were. 😉
At times, this was a very intense book. It showed the various sides of the conflict within the colonies along with the various opinions of each individual character very clearly in a unique way. It wasn’t just that, though. I was very involved in everything the characters were feeling and thinking. I really enjoyed that.
It was never too fast-paced despite being exciting; crucial things like character development or description were never ignored. As I mentioned earlier, a lot of telling instead of showing and a couple awkward sentences which interrupted the flow of the story.
I really loved Louis. He was my favorite character by far … though I liked Elizabeth, too. It’s rarely you see an accurately portrayed yet not overdone Frenchman. I don’t know why, but it just is that way. Though intriguingly French, Louis was natural and likable.
Elizabeth was also a very cool character. Most of the time when a book character (or anyone) has differing opinions from their parents, they end up having tons of quarrels with each other, hating each other, etc. It wasn’t so in this case, which was refreshing and cool. I love how, though standing firm in her beliefs, she respected her father and deferred to him. What an awesome way to be!
There were quite a few minor characters, but I won’t go into them. I admit that once or twice I got named mixed up or forgot who was married to who or something like that, but for the most part, they were interesting, individual characters which I really got invested in (and can’t wait to see in the sequel!).
Then there was the message. There are maybe 1,000 books called Hold Me Close. I know, because searching this book on Goodreads was a nightmare, especially since I couldn’t remember the author’s full name AND had a blonde moment in regards to the spelling of ‘Marguerite’ (which it completely my fault). I’ll bet that all of them are romance. Most are dirty romances if you can judge a book by the cover (which you’re not supposed to, but, um, in this case …). 😉
However, although this is a (really sweet, realistic) romance, the title isn’t a corny romantic line. It’s a prayer to God. Now, that’s original, isn’t it? Nice variance. Besides being clever, it’s a really deep, awesome message.
Overall, this is a really fantastic adventure/romance story that wraps you up in the era without overwhelming you with a ton of historical details. I’d definitely recommend it to anyone who loves sweet romances with strong historical, adventure, and Christian themes.
~Kellyn Roth