A Memory Between Us by Sarah Sundin

Title: A Memory Between Us
Author: Sarah Sundin
Series: Wings of Glory, #2
Genre: Historical Adventure/Romance
Age-Range: 15+ (upper young adult/adult)
Era: 1940s (WW2)
Setting: England
Publisher: Revell Books
Source: library
Rating: 5/5 stars
Content: 3/5. First, obviously, there is a war going on, planes are being shot down, people are dying/almost dying/being gravely wounded. However, it’s never graphic. So, yep, violence and thematic elements. No language. Then … there’s Ruth’s back story. (SPOILER) Basically, she was raped as a young girl. (SPOILER ENDS) It’s never described (no flashbacks or anything). It was tastefully handled (just like ’40s movies always handled that kind of thing), but it’s still there and she’s pretty broken, obviously. Also, (SPOILER) a man tries to take advantage of Ruth later on, but nothing comes of it and the guy goes to jail. (SPOILER ENDS)

A Memory Between Us by Sarah Sundin 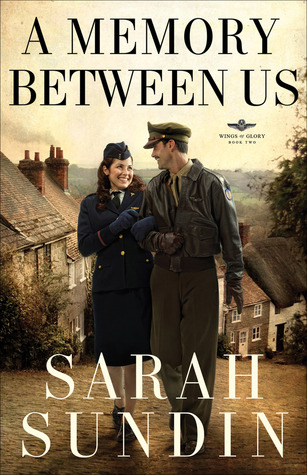 Major Jack Novak has never failed to meet a challenge–until he meets army nurse Lieutenant Ruth Doherty. When Jack lands in the army hospital after a plane crash, he makes winning Ruth’s heart a top priority mission. But he has his work cut out for him.

Not only is Ruth focused on her work in order to support her orphaned siblings back home, she carries a shameful secret that keeps her from giving her heart to any man.

Can Jack break down her defenses? Or are they destined to go their separate ways?

Wow. Just wow.
I’m sorry. It’s been almost two months, and I still can’t form words into sentences to describe this book.
It is so emotional.
It is so heartbreaking.
It is so beautiful.
I am almost crying while I write this, guys. Just thinking about the book is making me tear up.
I can’t really tell you a lot about the book itself, therefore. It’s … it’s just amazing. Read it. Now.
Except … well, I do have some content concerns (which are mentioned up there ^^). Therefore, I wouldn’t recommend it to younger teens without parental guidance. Older teens, however, should be able to handle it. It’s very delicately written, just like any ’40s movie. Except this is a ’40s book. And it wasn’t written during the ’40s. Doesn’t that just blow your mind? Sundin is incredibly talented.
This is an incredible story, from wonderful characters – every one like a real person with their ups, their downs, their ghosts – to fast-paced action scenes, to slower romance scenes (that were often cute … or heartbreaking … or both …).
Because I’m not capable of being organized just now (having fond reminisces about this book), I’ll list my favorite things.

I’d recommend A Memory Between Us to any lover of books. Why? Because I’m not required to give specifics for a novel as good as this. ANY lover of books – and quite a few book-haters, too – would love this novel.
~Kellyn Roth

This site and its contents copyright © 2018-2023, Kellyn Roth, Wild Blue Wonder Press.
Design by Kellyn Roth.
GOING SOMEWHERE?
December 2016 DaresKell's Blog
In Which I Fail at Vlogging. Again.Kell's Blog
%d bloggers like this: