Title: Blue Skies Tomorrow
Author: Sarah Sundin
Series Wings of Glory, #3
Genre: Historical Adventure/Romance
Age-Range: 13+ (young adult/adult)
Era: 1940s (WW2)
Setting: California (USA), England, France/Germany
Publisher: Revell Books
Source: library
Rating: 5/5 stars
Content: 3/5 stars. No language. There’s a war going on, which Jack participates in. People are dying, planes are being shot down, etc. Wife-beating (highlight to read spoilers): Jim (Helen’s now-dead husband) used to beat Helen and Jim’s father beats Jim’s mother. Helen has a couple memories about this and is scarred by it. No details. As far as sexual content, some pretty detailed kisses/wanting to kiss and all the falling in love stuff. Nothing really inappropriate for anyone 13+, without parental guidance and younger with parental guidance (although Ray mentions Helen is “used to a lot more than kisses.” Me: “Mmkay … I know she was married … so you didn’t have to mention that …”). 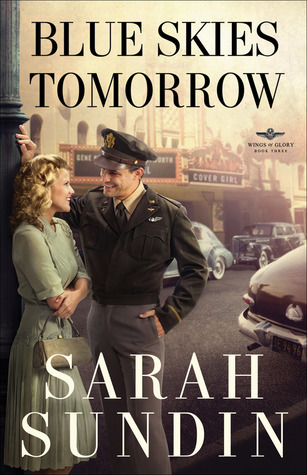 In a time of peril, can they find the courage to confront their fears and embrace a love that lasts?

When her husband becomes a casualty of the war in the Pacific, Helen Carlisle throws herself into volunteering for the war effort to conceal her feelings. But keeping up appearances as the grieving widow of a hometown hero is taking its toll. Soon something is going to give.

Lt. Raymond Novak prefers the pulpit to the cockpit. His stateside job training B-17 pilots allows him the luxury of a personal life–and a convenient excuse to ignore his deepest fear. When the beautiful Helen catches his eye and captures his heart, he is determined to win her hand.

But when Ray and Helen are called upon to step out in faith and put their reputations and their lives on the line, can they meet the challenges that face them? And can their young love survive until blue skies return?

Filled with drama, daring, and all the romance of the WWII era, Blue Skies Tomorrow is the captivating final book in the popular Wings of Glory series.

I can’t believe this fantastic series is over! Three books is really too few! I can’t stand it! *chokes*
Okay, so, this was a fantastic book. I didn’t like it as much A Memory Between Us, but it was as heartbreaking if not more so. Being hurt by someone you neither love nor trust is very different from being hurt by someone whom you love and trust, and … gosh. I was in tears … especially that scene where (highlight) Helen drives Ray away because he found out Jim used to beat her and she doesn’t want to dishonor his memory, etc. and that scene where Helen finds out that Ray is ‘dead.’
Although Helen was reacting incorrectly to what happened to her (heroizing Jim), it was really realistic! I totally understood why she did it. In fact, it’s fantastic how well we got into both the main characters’ heads.
I loved Ray. He was a simply fantastic character, a great guy. Sure, he had his problems, but I was like, “I DON’T CARE. YOU’RE PERFECT. STOP TRYING TO PERFECT THE PERFECTION, MAN!!!”
Helen … oh, Helen. You’re so messed up! Your child needs spanked. I wanted to give you a talking to. ‘A spanked child is a happy child.’ That’s what I’d tell you. Drag him along the straight and narrow (which basically means make him do what you want him to do because he’s a toddler and a toddler is like, “That’s mine and that’s mine and that’s mine although it’s actually yours …” and that’s not life!) when he’s too little not to stray, and eventually he’ll get up and walk it himself. You can’t make him into the perfect man, but …
And … I just realized the thing I thought Helen was most messed-up about was not spanking her kid …
Anyway, I really sympathized with Helen, even as I was frustrated with her. ‘Cause being scared of a kid a quarter your size? That’s … just sad. But I guess it’s understandable considering the circumstances.
The way Helen and Ray met and got to know each other and everything … I must say that was just perfect! I loved it.
I was a little upset with Mr. Novak about not interfering when he knew what was happening. I mean, he’s the pastor. I know he can’t force anything on anyone, but … he should definitely have dealt with it. It wasn’t ‘none of his business.’ When someone’s being hurt, it’s always your business to interfere and try to help them!
I found it hilarious how Jack and Walt didn’t recognize Ray until he mentioned the stain on the runner! Best (happy) scene in the book!
Anyway, this is a fantastic novel – though not quite the same as A Memory Between Us; nothing’s gonna trump that – and I really enjoyed it. I can’t wait to get my hands on something new by Sarah Sundin! 😀
~Kellyn Roth