The Show by John A. Heldt

Title: The Show
Author: John A. Heldt
Series: Northwest Passage, #3
Genre: Science Fiction Romance (time travel)
Age-Range: 14+ (young adult/adult)
Era: 1940s (WW2), contemporary, and 1918 (post-WW1)
Setting: London, England
Publisher: John A. Heldt
Source: author (in exchange for an honest review)
Rating: 3/5 stars
Content: 3/5. Some language (just a few times, though). Little/no violence (though mention of wars, etc.). Kisses (somewhat detailed), mentions of pregnancy. There’s a scene on Joel and Grace’s wedding night which I skipped and therefore couldn’t tell you about. So … no idea what went on there. *coughs* And then … Grace kinda gives her mother ‘the talk.’ I skimmed this as well, but I didn’t see anything explicit.

The Show by John A. Heldt 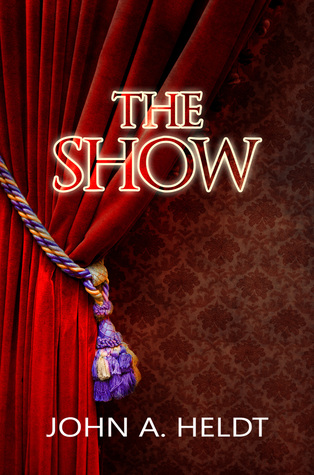 Grace Vandenberg, 21, is having a bad day. Minutes after Pearl Harbor is attacked, she learns that her boyfriend is a time traveler from 2000 who has abandoned her for a future he insists they cannot share. Determined to save their love, she follows him into the new century. But just when happiness is within her grasp, she accidentally enters a second time portal and exits in 1918.

Distraught and heartbroken, Grace starts a new life in the age of Woodrow Wilson, silent movies, and the Spanish flu.

She meets her parents as young, single adults and befriends a handsome, wounded Army captain just back from the war. In THE SHOW, the sequel to THE MINE, Grace finds love and friendship in the ashes of tragedy as she endures the trial of her life.

This was a somewhat disappointing novel, mostly because of Grace’s actions in 1918. I was especially confused by her actions towards the end regarding her parents. I didn’t get how that could be possible until the way time travel works in these books was explained in The Mirror. Now that I understand that, however, I’m able to understand this novel much better.
I must say, I loved Grace’s parents as teens. They were amusing, especially her mother. I had no idea ‘Mrs. Vandenburg’ was such a kick as a kid!
I also found it difficult to believe that Grace got over Joel that quickly. Joel was her everything. Sure, she needed to move on … but she was married to him regardless of differences in time and space. Moving on doesn’t necessarily have to involve another man, okay?
I found the whole idea of the theater interesting. Very cool concept. One of the best things about this story other than seeing Grace and Joel again, hearing Grace’s side of the story, etc.
I’m not going to go on more (because I had rating less than four stars … even though three stars is honestly a decent rating …). I’ll just say that this is a good story, but not quite as good as some of Heldt’s others.
~Kellyn Roth