A Lasting Impression by Tamera Alexander

A Lasting Impression by Tamera Alexander 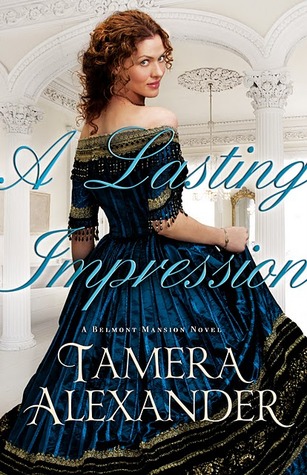 After an unwanted past, Claire strives to create something that will last as an artist among Nashville’s elite society in the 1860s.

Claire Laurent’s greatest aspiration is to paint something that will bring her acclaim. Yet her father insists she work as a copyist. A forger. When she’s forced to flee her home, her path collides with attorney Sutton Monroe, who shows her kindness by not turning her in to authorities. But when he later refuses to come to her aid, Claire fears she’s sorely misjudged him. Finding herself among the elite of Nashville society, Claire believes her dream of creating a lasting impression in the world of art is within reach–but only if her past remains hidden.
The Federal Army destroyed Sutton’s home, confiscated his land, and threatens to destroy his family’s honor. His determination to reclaim what belongs to him reveals a truth that may cost him more than he ever imagined–as well as the woman he loves.
Set at Nashville’s historic Belmont Mansion, a stunning antebellum manor built by Adelicia Acklen, A Lasting Impression is a sweeping love story about a nation mending after war, the redemption of those wounded, and the courage of a man and woman to see themselves–and each other–for who they really are.

AH THIS BOOK WAS SO AMAZING!!!!!!!!!
Okay, I’d better calm down and write an orderly review of this fantastic book which I adore and want to read again and again and again and again …
So … yep.
First, Belmont … gorgeous. I want to live there. I need to live there!
Second, Adelicia Acklen. Amazing character. She was a real person who actually lived and some of the words she said in the book were written by her in a letter to someone! That’s so cool! She has a really sad past. Really, really incredible woman. Wow, wow, wow!
Claire is a fantastic character! I love how hard-working she is, how good she is at her job. Her job is one to die for … although I definitely couldn’t do it. Her creativity in the party and all other things is fantastic. Just … wow.
Sutton is also a great character. I feel like he wasn’t as focused on as Claire, but he was still great. I really liked him.
As I mentioned before, the setting was once-again amazing; Tamera Alexander is always great at putting you in a place you want to live and that you see in a very vivid way. The characters were all well-developed (I love most of them and hate the others, which is how it’s supposed to be). The plot was great. There was a little back-and-forth between Claire and Sutton that I didn’t care, but yeah, otherwise, is was a fantastic book.
And … I have no negatives.
I’m just going to publish this (once-again, pretty short) review as I’m not feeling particularly creative. It was fantastic, I’d recommend it to any lover of historical fiction, sweet romances, lush settings, or intriguing plots.
~Kellyn Roth

This site and its contents copyright © 2018-2021, Kellyn Roth, Wild Blue Wonder Press.
Design by Kellyn Roth.
GOING SOMEWHERE?
0
The Mirror by John A. HeldtKell's Blog
In Which We Examine Millie Lark on a Non-Professional BasisKell's Blog
%d bloggers like this: