Title: The Mirror
Author: John A. Heldt
Series: Northwest Passage, #5
Genre: Science Fiction (time-travel) Romance
Age-Range: 15+ (upper young adult/adult)
Era: futuristic (2020) and 1960s
Setting: Seattle, Washington
Publisher: John A. Heldt
Source: author (in exchange for honest review)
Rating: 4/5 stars
Content: 4/5. A star was removed for content. No violence (though mentions of protests, the Civil Rights movement, and such). People are mean to a character because he’s black. Some cussing here and there – not very frequent. Mentions of birth control pills and that kind of thing (I think a mention of condoms, too? Ew …). A girl gets pregnant out of wedlock. Lots of kissing and mentions of kissing and mentions of sex, too. The word for those girls is promiscuous. But by 2020, I imagine that’s gonna be even more socially accepted, so … 😉 Just kidding. But seriously, though, not recommended to younger teens at all. Caution prescribed for older teens. 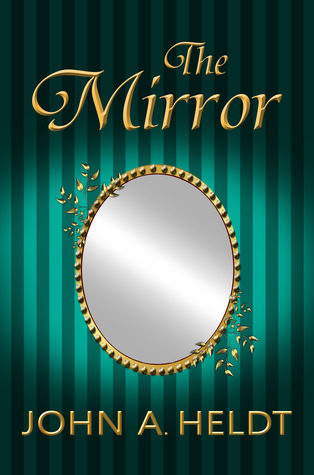 On September 11, 2020, Ginny and Katie Smith celebrate their nineteenth birthday at a country fair near Seattle. Ignoring the warnings of a fortune-teller, they enter a house of mirrors and exit in May 1964. Armed with the knowledge they need to return to their time, they try to make the most of what they believe will be a four-month vacation.

But their sixties adventure becomes complicated when they meet a revered great-grandmother and fall in love with local boys. In THE MIRROR, the sequel to THE MINE and THE SHOW, the sisters find happiness and heartbreak as they confront unexpected challenges and gut-wrenching choices in the age of civil rights, the Beatles, and Vietnam.

Again, a kind of short review I’m afraid to say. I should probably have set this one aside for a while because it’s a meaty book and I don’t want to forget anything, but I don’t want to make the author wait any longer, and this is what I have time for now. 🙂
This was a really great book! I enjoyed it from cover to cover. The only downside was the content. Lots of sex out of marriage, even if it wasn’t detailed. Didn’t care for that at all. However, if you can skim through that and pretend it didn’t happen (which I did), it is amazing.
I don’t read a lot of books set during this time period. I don’t know a ton about the Civil Rights movement. I’m not going to be studying it until … hmm, probably year after next year. And I’m sick of hearing about racism, frankly. I admit it might be a very real problem … but I feel like people make way too big a deal about it nowadays. However, back then racism was definitely a big thing, and this seemed an accurate, unbiased portrayal of the times.
I didn’t realize the Beatles were that big a deal! I like the Beatles, sure, they’re great … but the level of obsession! I had no idea. That was cool. 😀
Can we take a minute to appreciate James and Mike? Both great guys, both swell characters, and both with some serious problems on their hands! And James’s mom … gosh. Mike’s mom wasn’t bad, either, but James’s mom was my favorite. So much fun!
I really liked all the characters (that I was supposed to like, anyway … and even the bad guys were well-done!) though, like I said, Ginny and Katie (which surprised me! Katie!) both acted inappropriately by my standards. Even by the world’s standards, they were acting pretty dangerously (as evidenced by the … plot twist … at the end of the book).
Virginia … well, I can’t get enough of this girl. 🙂 She was fun as a young woman, and as a middle-aged woman she’s no less fun!
The subplot with Mike and Katie and Mike’s ancestors and all that … that was fantastic. I was a little confused in places, but for the most part, I loved it.
The ending was a little sad, but that was how it had to be … I know that. Still … sad. 🙁
Overall, this was a great book for adults and upper young adults. It’s really great, and I enjoyed it so much! Looking for more books like this one by John A. Heldt in the future!
~Kellyn Roth