The Innocent by Willowy Whisper

The Innocent by Willowy Whisper 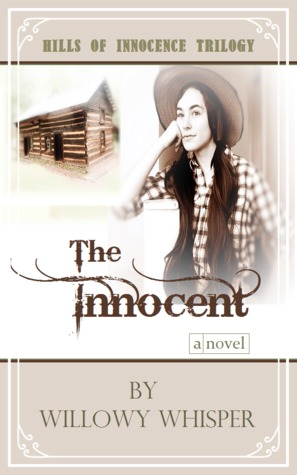 “I wonder who would shoot a girl so young…?” The question haunted him as he left the river and her grave behind.
Harvey West is given a month. One month to prove his innocence. As the evidence points him to the gallows, he fights to find the enemy of the beautiful Elsie Roselind. Someone wanted her gone.
Someone destroyed the evidence. Someone had to kill to keep her from coming back…
And the someone isn’t afraid to kill again—no matter what the cost.

The Innocent by Willowy Whisper is a great mystery/suspense novel set in the Old West. I really enjoyed it, and read most of it in two days (though I technically took longer because I read the first chapter then put it aside for a while due to busyness and a reading slump).
Plot {4/5}:
This novel had an exciting, intriguing plot. I admit I figured out the ‘mystery’ pretty early on, mostly because I wasn’t willing to suspect [SPOILERS] Brock, because I could see how he loved her [END OF SPOILERS]. I also felt from the beginning that [SPOILERS] Clyde wasn’t sincere [END OF SPOILERS]. At times it did seem to go on, especially at the end when we’d discovered who the murderer was. However, after I read on a little, I understood why the author was taking her time and forgave a temporary drag. 🙂
Characters {5/5}:
The characters were well-developed and interesting. I especially liked Harvey (such a good guy!), Brock (adorably sweet), and Jimmy (also adorably sweet … in a different way). Joe was interesting, as well, and Clyde was [SPOILERS] evil, of course. But still well-developed. I admit she fooled me about him at first! [END OF SPOILERS] I was a little irritated at Abigail once or twice. I was like, “Do you have handsome, sweet, understanding cowboys walk into your life and spend weeks trying to discover who killed your sister every day? No? THEN BE NICE TO HIM FOR CRYING OUT LOUD!” But I understand why she acted the way she acted, and I forgave her. Besides, I am even more stubborn than she is, so … what am I complaining about? It’s like the pot calling the kettle black.
Setting {4/5}:
There wasn’t really a lot of room for improvement here. I wish there could have been a little more description, however. I’d like to know about how every character looked like, what the houses look like, etc. Description can be sneaked in almost anywhere without massive blocks of it, and I think it would have added to my mental imagery. I’d also like to know what Rascal looks like. I’ve been imagining him as black or bay. Am I close, Willowy?
Writing {3/5}:
So, this is really the only place where I feel like the book could use major improvement. 3/5 is my ‘it was okay’ rating. Honestly, I felt like the book could have used a little more editing. There weren’t a lot of mistakes (no typos and the punctuation and spelling were good), but a lot of sentences were awkward and some things were repeated more than they needed to be. I think Willowy Whisper is an amazing writer, but it could have been a little more polished here. On the other hand, I’ve read more recent stories by her, so it could be that she’s just improved a ton since writing this one. 🙂
Content:
No language. There was violence and thematic elements, though nothing super graphic. A murder and a lot of talk about that (they were trying to solve it, after all), gunshot wounds, talking about the pain from the gunshot wounds, fist-fights, bleeding, people were almost burnt alive once, and illnesses/recovering from wounds. Some parts were pretty intense/suspenseful/even a little scary.
As far as sexual content, there were quite a few kisses/mentions of kissing. A couple were described (mostly just talking about emotions). Some of these kisses (not the described ones, though) were between a man and woman who didn’t end up getting married.
Not recommended to children under 12 (upper PG). However, after that, I wouldn’t have an reservations (unless you’re sensitive to that kind of thing).
Overall {4/5}:
An amazing story that I couldn’t put down in places with sweet characters and a suspenseful plot. It’s really a great book (despite my criticism on certain points … sorry, I can be very harsh!) and I hope to read more by the author (and about these characters) in the future.

This site and its contents copyright © 2018-2023, Kellyn Roth, Wild Blue Wonder Press.
Design by Kellyn Roth.
GOING SOMEWHERE?
January 2017 Dares (and New Year’s Resolutions)Kell's Blog
Ten Things You Need to do to Survive as an Author (and the Q&A Vlog Part 2)Kell's Blog
%d bloggers like this: