The Crowd by Alleece Balts

The Crowd by Alleece Balts 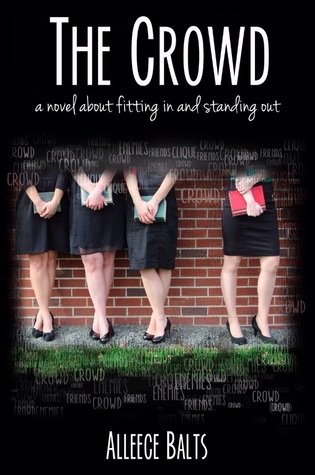 Whitfield Preparatory Academy ought to be the perfect school…

Not only does the Academy boast a distinguished faculty and lavish campus, it is also home to the privileged youth of the upper class. They will one day hold the reins of power in the business world and political arena – but for now, they exercise absolute authority at the Academy.
For seventeen-year-old Ella Parker, acceptance into the prestigious Academy is a dream come true. But her delight quickly turns to dread when she finds herself in the crosshairs of an elite group of ruthless students dubbed “the Crowd.” Ella’s been at the center of unwanted attention before – but never like this – and she’ll do anything to make them stop. Anything, that is, apart from accepting the advances of popular and wealthy playboy Jackson Montgomery, the leader of the Crowd.
Will Ella be humiliated, or triumph over her tormentors?
An irresistible story of faith, friendship, betrayal, and romance, The Crowd will immerse readers in Ella’s tumultuous struggle from the very first page.

The Crowd by Alleece Balts is a simply fantastic novel. That is the only word to describe this book: fantastic. I was, as the blurb says, immersed from the very first page. I loved it to death, and I can’t wait to get my hands on book 2!

Plot {5/5}:
I wasn’t sure exactly what to expect when I started this novel. I only knew I was sick to death of hearing about bullying. Why? Because I’m homeschooled and know nothing about it and just want people to stand up for themselves! I’ve read maybe a hundred YA/MG novels with characters getting bullied in it … and it always just annoys me.
However, for some reason this one didn’t annoy me at all.
Aside from that, the plot was fantastic. I’m not going to attempt to explain it to you, but I’ll just say it was amazing, start to finish (and you should read it; you should definitely read it!).
Characters {5/5}:
The characters were another of this novel’s strong points. Ella was one of the most individualistic characters I’ve read of in a long time. There was nothing generic about Ella! Jack was also super cool and interesting (his past, the redemption, etc. were all very real). I love how Ella’s dad was a rockstar and her mother was a reporter and the story of their meeting … wow. Even though we didn’t get to meet either of Ella’s parents (well, we didn’t get to meet Ella’s mom for very long, anyway), I got a super good idea of who they are just based on their actions (and because of Ella’s thinking about them). The same goes for Malcolm.
I’m not going to go into every single character, but … wow. Quite a few of them, all so beautifully done, and I never got them mixed up! How did Mrs. Balts do it? 😀
Setting {4/5}:
Fairly strong. I would have liked a little more focus on the setting here and there. For the most part, though, it was good, and the description was top-notch.
Writing {3/5}:
The author’s writing is absolutely gorgeous! It reminds me of … hmm. I don’t know. Old-fashioned yet contemporary. Whimsical and sweet, but dipping into solemnity when need be. It really showed a lot of emotions and had a lot of content (not the bad kind; I mean content like deep stuff) while not overloading my tiny little brain. 😛
The one problem was the head-hopping. I was never sure if I was in Ella, Jack, or Aunt Meg’s head. It kept changing, oftentimes three or four times in a scene. It was confusing. It didn’t bug me a ton, but it almost made me shave off half a star … before I realized it just wasn’t worth it because the novel was too strong besides that.
Content:
I’d say light PG-13. I’m gonna try to say why as accurately as possible, but I’m not going to list every little thing. Depending on the maturity level, younger teens may need parental guidance.
No cussing. Some crude language and name-calling. A mention of gay people (as a part of the name-calling, not justified). Bullying. Mentions of (and an attempted) suicide. Mentions of drug-use and drinking. Mentions of hospitals, blood, gunshot wounds, almost dying, cancer, etc. Nothing graphic or disturbing.
Lots of attraction, romantic emotions, etc. There are some crude jokes that count towards sexual content. Quite a few kisses, ranging from no details to somewhat-detailed-ish. It’s pretty clear that most of the girls and boys at the campus are none too moralistic. Then … once Ella is hiding a closet (she was snooping and had to hide) and there’s a couple in the room presumably having s*x. Nothing is detailed and it’s not talked about a ton, but it’s pretty obvious what’s going on. So there’s that … *awkwardness hopefully ends* But it was such a very brief scene, so … I don’t know.
Overall {5/5}:
A fantastic novel I’d recommend to almost any older teenager/adult and some younger teenagers (depending on who they are and what they can handle). PLEASE let the sequel be coming out soon! Plllllleeeeeaaaaseeee!!!!

This site and its contents copyright © 2018-2023, Kellyn Roth, Wild Blue Wonder Press.
Design by Kellyn Roth.
GOING SOMEWHERE?
A Lot (and I mean a lot) of Blog TagsKell's Blog
Beyond Her Calling Plot Reveal and the Final Q&A VlogKell's Blog
%d bloggers like this: