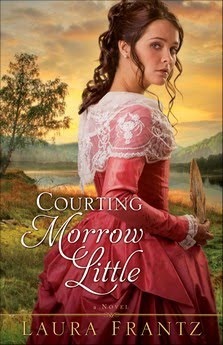 Morrow Little is haunted by the memory of the day her family was torn apart by raiding Shawnee warriors.
Now that she is nearly a grown woman and her father is ailing, she must make difficult choices about the future. Several men–ranging from the undesired to the unthinkable–vie for her attentions, but she finds herself inexplicably drawn to a forbidden love that both terrifies and intrigues her.
Can she betray the memory of her lost loved ones–and garner suspicion from her friends–by pursuing a life with him? Or should she seal her own misery by marrying a man she doesn’t love?
This sweeping tale of romance and forgiveness will envelop readers as it takes them from a Kentucky fort through the vast wilderness to the west in search of true love.

It’s been over a month since I read this novel, but I’m going to try to do it justice. It was really a great book … but there were some things I thought dragged, and I read it in less than two days, so that’s saying something. Also, a lot of the situations seemed unrealistic to me. There didn’t really seem to be a plot, either, in my opinion.
Plot {2/5}:
It was okay. I liked it overall, but, as I said before, it went on and on and on. I will say that the title makes no sense. No one ever courted Morrow Little! Not really. And certainly not for much of the book, if you can count it as courting. The book was more like the life of Morrow Little after she returned from the East to the Kentucky wilderness and [SPOILERS] meets a hot Indian who her father nursed back to health as a kid. They fall in love and get hitched AND THEN the story goes on about their adventures as a married couple. [END OF SPOILERS] I also found a lot of things to be unrealistic or inconsistent (more on that in the character section).
Anyway, it just seemed to go on forever and not be focused on any single theme (except Morrow’s life, I suppose).
It was a good plot, though. 😛
Characters {3/5}:
I liked Red Shirt, although I found it difficult to like him because I read the whole book feeling like he didn’t have a real name. I mean, Indian names are cool, yes … I like my Bright Stars and High Hats and Fire Bottom as much as you do … but they don’t feel like real names to me! I was like, “Okay … Red Shirt. That’s just … two words stuck together.” XD That’s just me being me, though.
But … he didn’t put Morrow first. I know, the concerns of a nation are probably more important than the concerns of one woman … but … but … eesh. He just seemed inconsistent. If I were Morrow, I would never trust him. He isn’t necessarily going to be there for her, plainly.
I didn’t mind Morrow. She was weepy and weak, yes, but I wouldn’t have minded that … if she had been consistent in it. For instance, I found Morrow to be whiny at times … and then suddenly she was [END OF SPOILER] riding a horse half a day while in labor [END OF SPOILER]!What the what?! And I didn’t see her grow as a character between her sobbing days (which were numerous) and her adventurous days! But maybe I missed it. Like I said, I read it fast.
I can’t think of other people now as I only took notes on Morrow and Red Shirt and it’s been a while.
However, I will once-again bring up names … because ‘Morrow’? Is that really historically inaccurate? And if Morrow has an unusual (but not impossible) name for her era, why was it never brought up? I’m confused …
Setting {5/5}:
Laura Frantz is amazing about researching her novels and building a great setting. I’ve only read The Mistress of Tall Acre, but … wow. She’s always so strong in this area!
The description was also good. She really portrayed the Red River (and every place we went) in a way that made me want to go there.
Writing {5/5}:
I literally can’t remember how she did in this area, and I forgot to take notes about it! So I’m giving it 5/5 stars because apparently there was nothing that bugged me enough to make a note about it.
Content:
This is not necessarily 100% accurate as it’s been a while, but I’ll do my best.
No cussing/crude language. Some violence and mentions of violence (Indian massacres, wars, etc.) Mostly mentions of violence, if I remember correctly. Never anything disturbing.
I seem to remember that there was a lot of sexual content in this book. It didn’t make me incredibly uncomfortable, but it was still a little more than I would have liked. For instance, in my opinion, we know every time [SPOILER] Red Shirt and Morrow … well, you know. [END OF SPOILER] It drives me crazy! I DID NOT NEED TO KNOW THAT! There were no details or anything, but … why!? Still, that’s the risk I take when reading fiction probably aimed at adults. A somewhat-detailed description of childbirth and lots of talk about pregnancy, etc.
Overall {3.5/5}:
Although I wouldn’t recommend this to a first-time Frantz fan (I’ve read better by her), it was a great story and if you like Frantz’s novels (which I do), you should definitely read it!
~Kellyn Roth