The Remnant by William Michael Davidson

Today I’m taking a break from the blog tour of The New Diary to participate in the blog tour of The Remnant by William Michael Davidson. This tour is being hosted by MC Blog Tours.
Onto the review!
Title: The Remnant
Author: William Michael Davidson
Genre: Christian Dystopian/Science Fiction
Setting: Semi-futuristic United States
Publisher: Dancing Lemur Press
Source: from author (in exchange for honest review)
Overall Rating: 5/5 stars

The Remnant by William Michael Davidson 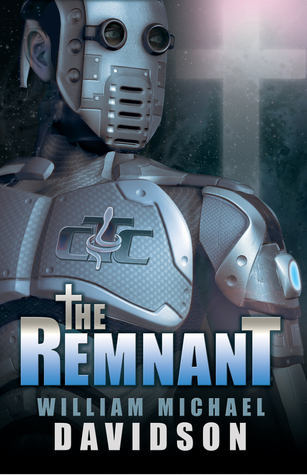 Colton Pierce apprehends Abberants—those who display symptoms of faith—and quarantines them on a remote island to ensure public safety.  Years prior, the government released a genetically-engineered super flu that destroyed the genes believed to be the biological source of spiritual experience in an effort to rid the world of terrorism. As an extractor with the Center for Theological Control, Colton is dedicated to the cause.

But Colton’s steadfast commitment is challenged when he learns his own son has been targeted for extraction. An underground militia, the Remnant, agrees to help Colton save his son in exchange for his assistance with their plan to free the Aberrants on the island.

Colton is faced with the most important decision of his life. Remain faithful to the CTC? Or give up everything to save his son?

I wasn’t sure exactly what to expect when I started reading this book. I was a little wary, as I’ve never read a novel like this before. Of course, it is pretty original, so I’d probably be hard-pressed to find another book like it.
I loved it (and you can see by my rating), and I’d definitely recommend to anyone … even people who, like myself, are skeptical of this genre.
Plot {4/5}:
I removed one point because it got off to a slow start. I was hardly able to make my way through part one. However, after that, it quickly sped up and became, well, amazing. My favorite scene was in the Mourning Room when Selma talked to Colton. I also enjoyed everything about downloading the virus, because I find that idea intriguing, and also when Selma tells Colton about ‘Gus.’
Characters {5/5}:
The characters were all vividly portrayed and easy to keep track of. I especially liked Selma and Colton (more specifically, them together – they made a great team, honestly).
Selma was a unique, interesting individual. She’s intriguing, and she stands up for herself while still being womanly.
Colton is a pretty cool guy. I totally got his motivations and understood why he did what he did. I also sympathize with him about Marty. Though I’m good with kids (unlike Colton …), I can’t stand signs of weakness. It just bugs me. I’m like, “So what if you fell down and broke your arm? Get up!”
Ashton deserves to die. Hopefully there will be a sequel featuring the tragic death of one Ashton. 😉 Seriously, though, I hate him sooo much!
And ‘Gus’ was amazing, of course. 😛
Setting {3/5}:
Probably the weakest part of the book. Although it is futuristic, not a lot has changed. Sure, there are some technological advancements (such as the ability to, you know, plant a chip in someone’s head and keep tabs on them …), but the characters in this book use the same cars we do (albeit battery-operated) and not many social changes seem to have taken place.
For instance, Colton mentally refers to Ashton as feminine. Would they really even care enough to point that out in the post-2060 world? I don’t think so. It’s all going downhill, especially if religion is banned! 😉
But this is just me picking at little things, and it didn’t really decrease my enjoyment of the story.
Writing {4/5}:
Could have used a little polishing here and there, but it was overall good. Still, it was too long for my taste. I wish it could be shortened a bit. There could have been less explanation about every little thing.
Content {3/5}:
No language. Mild violence (including someone almost getting choked and then a lot of talk about cyanide gas being used to kill a lot of people). Disturbing stuff, such a religion/anything religious (e.g. praying, using the word ‘God,’ etc.) being banned and people who do these things being sent to ‘the Island’ and then those people being scheduled for termination (with cyanide gas). One kiss towards the end, not-detailed, and some (barely noticeable, never a big part of the plot at all) romancey stuff.
Overall {5/5}:
This is one of those books that I’ll probably reread at some point, that I won’t delete from my Kindle, and that I’ll recommend to my friends. I’m hoping the author will come out with a sequel … and if not, I’d be excited to read something new by Mr. Davidson, anyway!

William Michael Davidson lives in Long Beach, California with his wife and two daughters. A believer that “good living produces good writing,” Davidson writes early in the morning so he can get outside, exercise, spend time with people, and experience as much as possible.
A writer of speculative fiction, he enjoys stories that deal with humanity’s inherent need for redemption.
For more on Davidson and his writing, connect with him on Goodreads, Twitter, Facebook, and Amazon Author’s Page.

There is also a giveaway for two print copies that are available to those living in the U.S. only and one eBook copy available international. The giveaway will end at 12 a.m. (EST) on Sunday, Feb. 26. Enter to win now!
You can find the schedule to read the rest of the posts of this amazing blog tour here.
~Kellyn Roth