The Lucky Hat Mine by J.v.L. Bell

The Lucky Hat Mine by J.v.L. Bell 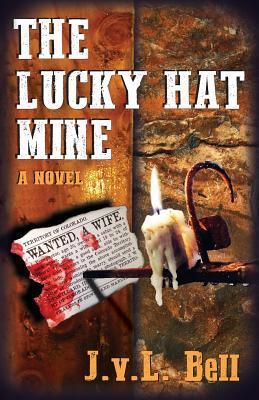 A recipe for true love or murder? Ingredients: one Southern belle, one Colorado gold miner, a wife wanted classified, and a fainting goat. Let simmer.

What’s a Southern belle to do in 1863? Wife-wanted ads are always risky business, but Millie Virginia never imagined she’d survive the perilous trip across the Great Plains to find her intended husband in a pine box. Was he killed in an accident? Or murdered for his gold mine? Stuck in the mining town of Idaho Springs, Colorado territory, without friends or means, Millie is beleaguered by undesirable suitors and threatened by an unknown assailant. Her troubles escalate when the brother of her dead fiancé, Dominic Drouillard, unexpectedly turns up.

Dom is an ill-mannered mountain man who invades Millie’s log cabin, insists that his brother was murdered, and refuses to leave until he finds the killer. Compelled to join forces with her erstwhile brother-in-law, Millie discovers the search for Colorado gold is perilous, especially with a murderer on their trail.

The Lucky Hat Mine interlaces the tale of a feisty heroine with frontier legend and lore making for an arousing historical murder mystery.

This was a great book that kept me entertained and wanting more. It was funny, adventurous, and intriguing, truly a wild and whacky ride. However, I did find the content (mostly the constant stream of innuendo) to be a little more than I was comfortable with.
Plot {4/5}:
The plot was (mostly) amazing. I enjoyed it from beginning to end. In the middle it did drag just a little bit, but after Dominic arrived, it picked up again and was as entertaining and captivating as before.
I did solve the mystery involving the treasure Millie’s father hid rather early. It seemed pretty obvious to me as soon as I heard of the treasure existing. However, I didn’t guess the murderer until he was revealed. I was absolutely surprised, not having considered him as a potential suspect.
I was a little bit confused about the Christian content. This is by no means Christian fiction, and I wasn’t expecting it to be. So … why did Millie think about God so much in the first half of the novel … and then suddenly drop it? I wanted to pull her aside and answer all her questions, poor girl. She sounds so confused.
Characters {5/5}:
The characters were all well-developed and original. I was able to keep them all separated in my mind (and there were quite a few).  I really liked Buttercup. She was hilarious. And Dominic. I want to meet someone like Dominic; he was really great. Millie amused me, and I found myself empathizing with her on several points. Then there was Mary. She was sweet. I also liked Charlotte … Charlotte was funny.
I think my favorite character was Dom. He was so straightforward, and he wasn’t perturbed by anything.
Setting {5/5}:
Loved the descriptions of Colorado terrain. I want to go there someday! It sounds so gorgeous. Reminds me of the Cascades, only more rugged.
Writing {3/5}:
It could be partially due to the weird formatting I got when I downloaded it, but I occasionally found the writing hard to get through. It wasn’t bad … it just wasn’t amazing. As this was an ARC copy, I’m not going to judge it too harshly, however.
Content {4/5}:
This is where the novel really failed in my eyes. Of course, none of this matters to someone who isn’t as careful with content as I am (and there weren’t any really explicit scenes), but there was a little too much to make me comfortable.
Language: “d*mn” several times, “oh my g*d” and variations of this a couple times,  and Millie’s favorite expression is “Oh, Lor.'”
Violence: murders, wars, gunshot wounds, etc. Nothing graphic.
Sexual: many men want Millie to marry them, some as a “bedwarmer” or something like that. Millie wonders repeatedly as to what married couples … do. (Sorry. This is awkward. XD ) Mentions of married bliss, sleeping with a man, etc. Millie repeatedly reiterates how inappropriate it is for her and Dom to share a cabin. Dom touches Millie inappropriately. Several mentions of prostitutes. Lots of innuendo. Millie has to remove Dom’s pants (he has long underwear on under them) while he’s unconscious to tend a bullet wound at one point, which wouldn’t be so bad if she weren’t overthinking everything. Just … that kind of stuff.
One star removed. Not recommended for younger teens. 15+ only.
Overall {3.5/5}:
Besides the content, this was an entertaining story that I’d recommend to anyone who enjoys hilarious historical mysteries with a touch of romance.
~Kellyn Roth