A Question of Honor by Jesseca Wheaton (blog tour)

A Question of Honor by Jesseca Wheaton 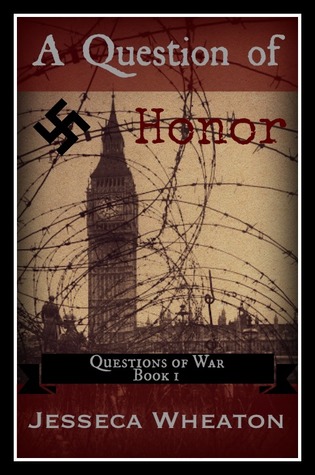 When German soldiers invade France during World War II, young Joyanna’s perfect world is shattered. In the hands of those who hate her, she battles to comprehend why people can be so ruthless and cold toward those whom they have never met.

David Sullivan, pilot in the Royal Air Force, was certain he would never hate, but a painful loss forces him to either reconsider or do the inconceivable—forgive. He is suddenly challenged by the realization that doing God’s will is not easy, but most important. With the lives of freedom-fighters relying on him, he must learn the difficult lesson that he is not in control, but merely one who must surrender his heart of obedience to One greater.

A sudden turn of events lands Joyanna and David in the same country—but for far different reasons. When their paths cross, David finds he must make a decision that will affect them both for the rest of their lives.

Will he choose vengeance, or will he let his life be ruled by a higher standard? A standard of Honor.

This is my favorite book ever.
Okay, it’s not my absolute favorite book, but it’s among my favorite books. It’s just so good!
It gave me every (positive) emotion that exists, making me cry and laugh and jump up and down with a mixture of crying and laughing. It taught me some important truths that I honestly had trouble accepting before, and it was absolutely captivating.
Plot {5/5}:
One of those plots you can simply not rip your eyes away from. It was just the best ever. I never do this (because that’s what the blurb’s for), but I’m going to tell you a little about it instead of just rambling on about how amazing it is.
In the prologue, young Joyanna, a Christian Jew who ran away from Germany and is now living in war-torn France, sees her father shot by a Nazi.
Next we skip to Kansas, USA, where David Sullivan and his best friend Gil test-fly planes for the army. Both of these daring fliers decide to leave their country (against the will of the government) and join the RAF (Royal Air Force) in England. Gil is recently married to Lily (*glares at Lily* *who stole my Gil from me*) and David marries his fiancée, Elaine, before he leaves.
Back in France, merciless Nazi Erich kidnaps Joyanna after her mother and sister are taken away. He wants to use her to glean information … but Joyanna starts to steal her way into his heart … and Erich just doesn’t know how to deal with this spunky little Jew. He should hate her … but he doesn’t. Not really.
As you can see, this is one of the best plots ever. One of the reasons I loved it was because of the POVs. Each point of view was so amazing.

Each of these three taught me something different.

Jesseca is an 18-year old daughter, sister, and a child of God. Her days are spent reading, cooking, spending time with siblings, or playing piano.  And writing, of course! At an early age words fascinated her, and her love for the printed page has only grown. She lives with her parents and seven siblings in the sunny state of Kansas, and she’s convinced there’s no place like home.

I’m excited to see all those amazing posts, aren’t you? Before you go, allow me to direct you to the giveaway …

This site and its contents copyright © 2018-2021, Kellyn Roth, Wild Blue Wonder Press.
Design by Kellyn Roth.
GOING SOMEWHERE?
0
Kell in Cal(ifornia)Kell's Blog
In Which I Try to Improve MyselfKell's Blog
%d bloggers like this: