A Mighty Fortress by Faith Blum

A Mighty Fortress by Faith Blum 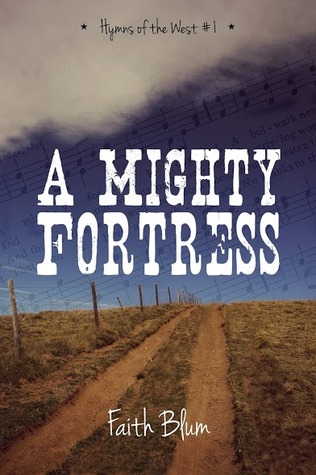 Joshua and Ruth Brookings are traveling by stagecoach to finally join their parents in Montana. Attacked by murderous outlaws, the teens barely escape with their lives and must survive in the barren Wyoming and Montana territories and escape the man who’s hunting them.
Seven years ago, Jed Stuart ran away from home and joined Tom’s gang. Jed is tired of the lawlessness and wants out. The only problem? He is the boss’s right-hand man and will never be able to leave. And what’s one more stagecoach robbery, anyway?
Can Joshua lean on God’s strength to keep himself and his sister alive until they find a town? Will Jed be able to face his anger or will it consume him completely? All three are running–the hunter and hunted. What will happen when they meet?

This was one of those books I just had to slog through. I was determined to finish it, but I really didn’t want to. I didn’t enjoy it. However, it wasn’t all bad, and it may be for some people more than me.
Note: the author has improved so much since writing of this book, and I really have enjoyed her more recent works.

It started out pretty well, but towards the middle it dragged on and on. Also, when dealing with the dual story lines of Joshua/Ruth and Jed, it skipped all over the place. One moment we’d be a month ahead, the next we’d be two months behind, the next we’d be a year ago, and so on.

There were quite a few characters towards the end, but I easily kept them separated in my head. I didn’t really like Ruth (I found her to be a bit of a Mary Sue) or Joshua (same). They both seemed judgmental to me.
I did like Jed, who was presumably the antagonist. I looked forward to seeing what happened next to him. He made me want to write a Western. I don’t know why, but I just find the outlaws and sheriffs and such of the old west to be fascinating. Probably too much John Wayne …

The description was pretty good. I really do want to visit Montana someday. I didn’t really see anything missing in this aspect. The dialogue was sometimes a little too modern.

This book probably needs a little more editing. The worst problem was probably the head-hopping. I never knew whose head we were in, which was confusing.

I normally love reading Christian fiction … but in this book, I found the Christian content a little bit preachy. It was hard to get through the paragraphs of Bible that seemed put in at random. Almost everyone in this book was a Christian or became a Christian (usually remarkably easily), which I didn’t find very realistic.
However, the overall theme of redemption and forgiveness was a good one – despite my not liking the portrayal of it – and I did appreciate that.

Language: n/a
Violence: robbing, outlawing, and even several murders. Never detailed, always treated as (very) wrong.
Sexual: Jed supposedly raped a girl at one point. It all happened off-screen and was dealt with pretty tastefully.

Not my favorite book. I didn’t really like it and wouldn’t recommend it. However, later works by the author were much better.
~Kellyn Roth

This site and its contents copyright © 2018-2021, Kellyn Roth, Wild Blue Wonder Press.
Design by Kellyn Roth.
GOING SOMEWHERE?
In Which Kellyn RestsKell's Blog
How to Use Pinterest as an AuthorKell's Blog
%d bloggers like this: