Be Thou My Vision by Faith Blum

Be Thou My Vision by Faith Blum 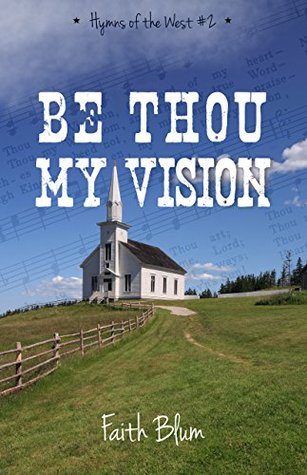 “The church was empty when I dragged myself out of the pew and headed out the door. As I opened the door, the corner of my eye caught a flicker of movement which I chose to ignore. I walked down the steps and was nearly bowled over by two wild boys. With arms grown strong and quick from man-handling two brothers growing up, I grabbed the two boys before they had a chance to escape me. ”
Anna Stuart is comfortable with her life. She may be a 30 year old spinster, but she has her routine and enjoys taking care of her father and older brother. One letter shatters all her routines, comfort, and enjoyment. After learning of her brother’s death, Anna feels like her life will never be the same again.
Then she meets two motherless boys. Did God place them in her life to lead her to a new vision of life? Can she trust God to give her the desires of her heart before she even knows what they are?

As you know, I didn’t really enjoy A Mighty Fortress, so I was a little nervous when I began this book.
Lots of my friends on Goodreads really like this series, so I was going, “I hope I don’t offend anyone …” I even know the author to a certain extent … and I really do hate giving bad reviews regardless. I decided I would just start the book, and if I didn’t like it, I’d put it down and say I didn’t finish it.
But, long story short, I did end up really enjoying this book. It had some ups and downs, but there were mostly ups.

Very good. I was captivated in some places, and it never slowed down too much. The story as a whole really appealed to me.
The only thing I find somewhat unbelievable is that the whole church was unwilling to welcome Anna and insisted upon believing she was trying to ‘ensnare’ Miles. Surely there’d be one or two true Christians in a whole town, right? Why would everyone believe that terrible gossip? Makes no sense to me.
Also, you’d think someone would think to help out the pastor with his little boys after his wife died.

I think the book actually would have benefited by adding in a couple more people from the church/town, but otherwise, the characters and character development were fairly good. My take on a few of the characters …
Anna: really a sweet girl! It’s cool how she sought out God without any encouragement from her family … or anyone else, really. However, her transformation happened very fast … and after it she was an amazing Christian. How did she do that so fast?! I want to know her secret to insta-Christianity.
James: so sweet. <3
John: isn’t he the awesomest little troublemaker? 🙂
Miles: such a good guy! I really enjoyed his sense of humor. A time or two he moved to slowly for my taste, but he eventually did what I was trying to convince him to do the whole book long.

The setting did need a lot of work. I would have liked to see more description of the characters and of the area around them. I was rarely sure about what stuff looked like. I had to use my imagination a lot, though, which is an upside. 😛

My only nit to pick is the POV switches. Most of the book was in first person, Anna’s perspective. However, occasionally the author would switch to third person in a different character’s perspective. This was confusing and made the book feel a little choppy. Otherwise, it was well-written.

Loved it! Strong Christian content is oftentimes missing in contemporary fiction, so it was great to see this here. I admit I did skim through some of the overly-long prayers and Bible quotations, though. I know I should probably read the Bible more (even reading through the Bible in a year as I am, I can skip days), but that’s just not the way to get me to read it, apparently. 😉

Language: n/a
Violence: mentions of Mr. Stuart being cruel to Jed and beating him. Mentions of outlaws, thievery, murders, etc. No details. John gets in a fight with one his schoolfellow at one point.
Sexual: people claim that Anna is pregnant and that’s why she and Miles are marrying. It’s briefly mentioned that Anna’s mother died in childbirth.
Good for all ages. Parental guidance suggested for children under 12 because of the gossip about Anna.

A great book with just a few things that lowered the rating one star, Be Thou My Vision is a great story for upper middle graders and teens alike.
~Kellyn Roth

This site and its contents copyright © 2018-2021, Kellyn Roth, Wild Blue Wonder Press.
Design by Kellyn Roth.
GOING SOMEWHERE?
0
How to Use Pinterest as an AuthorKell's Blog
10 Tips for Surviving Camp NaNoWriMoKell's Blog
%d bloggers like this: