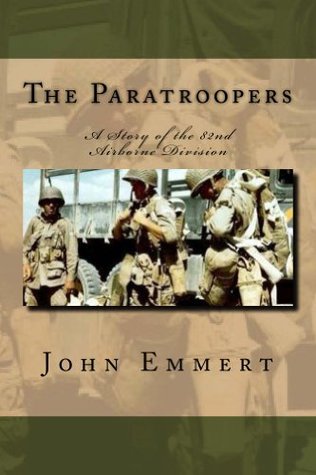 Steven Weaver’s life as a college student was active. If he wasn’t studying, he was playing varsity football or basketball. Now, with the coming of war, his first months in the Army lacked activity until he was given a unique opportunity in the summer of 1942 to join a group of air deployed combat infantry looking for athletic volunteers. Little did he know what would be asked of himself and his faith under fire.

I honestly wasn’t really expecting to enjoy this book too much, but I decided to read it anyway because a friend of mine gave me a physical copy, and I was tired of reading on Kindle.
I admit I didn’t really enjoy it too much at first, but once it got going, I liked it. It isn’t my favorite kind of book to read, but there were some parts that were very interesting and even exciting.

Like I said, this isn’t really my favorite kind of story to read, so that may account in part for its rating.
However, I did find the start and several places in the middle to be a little slow even when the content was interesting. I’m not really interested into football – at least not watching or reading about it – and the introductory scene didn’t really catch my attention. Unless you care about the characters, only a die-hard sport-lover can really get into a scene like that. 😉
Also, it took a while for Steve to sign up for the army and then get the transfer to the paratroopers after which the action really began with his intense training.
The account of the training was interesting. I don’t know a lot about WW2 except what I’ve learned from historical fiction, movies made during that time (like a hundred … I’m a huge classic movie fan), and basic history, so I had several, “Whoa, seriously!?” moments. I mean, I knew they’d do a lot of physical training … but to me that just seems crazy! But yep, it was probably necessary and made them top-notch and all.

To be honest, the only ones who really stood out were Joe and Martin! Joe … he was amazing. He was really well-developed. Martin was just a fun guy. However, I found Steve to be a bit of a Gary Sue and none of the other characters really stood out to me. I forgot who they are and got them confused. However, Joe … wow. I just love Joe so much. Such a goof. 🙂

This novel was obviously thoroughly researched. He knew everything there was to know about the paratroopers and their training methods and their guns and just about everything else. However, the dialogue didn’t really feel ’40s-ish to me, and there were a couple things that didn’t feel socially accurate.
For instance, all Steve’s fellow paratroopers were disrespectful of his religion. To me, that was ridiculous. I might be wrong, but I’ve always been taught and observed that, during the ’40s, people were very respectful of Christianity.
I can see one or two of the paratroopers being skeptical, but they probably would have at least kept their mouths shut unless they were complete jerks with no manners. Maybe I’m wrong … I seriously doubt people would have teased Steve about praying and reading the Bible.

Needs work, but there’s potential. A lot more historical detail than I like, but for a WW2 scholar, this book would be great.

Language: n/a
Violence: it’s set during a war and there are several deaths, many wounded and disfigured, etc. Nothing overly gory, but the facts aren’t hidden. A couple fistfights.
Sexual: a couple mentions of pregnancy/children being born (no details). A group of soldiers attempt to grab a lady on the streets, but Steve and his friends stop them so nothing happens.
Overall, nothing that bugged me. Very clean. Recommended for 12+.

A great adventure story for anyone who loves learning about all the little details of WW2.