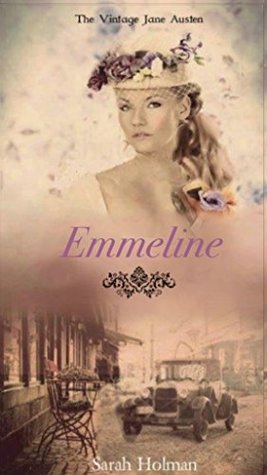 What if Jane Austen’s Emma lived in America in the year 1930?
The talk of stock market crashes and depression isn’t going to keep Emmeline Wellington down. Born to wealth and privilege, Emmeline wants nothing more than to help her new friend, Catarina, find a husband. Emmeline sets her sights on one of the town’s most eligible bachelors, but nothing seems to go right. Even her friend and neighbor Fredrick Knight seems to question her at every turn.
Will she help Catarina find the man of her dreams? Why is her father acting so strangely? Will the downturn affect her life, despite her best efforts?

I am a hard-core Austenite. However, as always with Jane Austen retellings, I forced myself to get into the mind-set of Emmeline being its own book before reading it. Otherwise, I’d be continually comparing the author to Austen, which just isn’t fair.
With this one, though … I let myself get a wee bit disappointed with the way the characters were portrayed. I put this book aside for a while and forced myself to look at it as not a retelling of my precious Emma, but as a completely different book with random scenes from Emma in it. 😉
Other than that, it was a fairly decent book, but not an amazing one. All my friends  will probably kill me, but I just didn’t like it!

All the scenes from Emma interpreted in a 1930s setting were fantastic. I enjoyed a lot of the little twisted and turns, and it was overall pretty enjoyable.
However, towards the end it really rushed, and I was disappointed with the whole plot twist with Morgan. I was like, “Uh … no. I’m sorry, I just can’t do this now …” More my fault than the book’s, of course. I just liked Morgan more than I should have … always have … though not Morgan, I suppose, but Frank Churchill.

Emmeline: whoa, that was a sudden turn-around! If all it took for you to change your wicked ways was for Fredrick to yell at you, why didn’t it work earlier in book? I’m confused. She was a good Emma, though. It’s hard to write this character without having her come across as selfish and overbearing. It was easier to see her self-deception, though. I was never fooled as one can be when reading Emma. Of course, that’s another unfair comparison.
Fredrick: I know this is an interpretation, and the author can change whatever she wants, but … I wish Fredrick didn’t go out without his hat and looked messy and stuff. He also came across as far more stuffy and preachy than Austen’s Knightley, which was disappointing. And a bit of a paradox. He was amusing, though, and his relationship with Emmeline was adorable.
Catarina: awwwww. <3 This girl is such a sweetheart! And her being a German immigrant? Yes. Just yes.
Geraldine: Miss Bates is young, doesn’t talk a lot, and is redeemable? Eh, no. It’s a cool idea … but no. The boarding house and the falling-from-wealth twist was awesome, though. It was also cool how she was kinda old-fashioned.
Morgan: I liked him, but I was a little disappointed as to that whole plot twist at the end. I just wanted him to be merry and charming and clever, not evil. Why couldn’t he just be merry and charming and clever?!
Evelyn: awwwww, again. Really sweet. But … as her own character, not as an interpretation of Miss Fairfax.
Jack: *growls* But he was perfect.
Doris: I disliked her (everyone loves disliking “Mrs. Elton!”). But I also thought she had a point. She went overboard, but there’s absolutely nothing wrong with dancing or with nicknames or with … quite a few other things. You’re right, Dory. It is a ‘quaint’ little town … *raises eyebrows*

This is where the book really disappointed me. I felt like half the time the characters still spoke like they were from the 1800s … except for random slang words tossed in. Usually by the villains. Um …? The whole feel of the book was vintage, yes, but a little too vintage. It was also lacking in description in several places.
And … I understand the need for historical accuracy, but the Christians in this book came across as stuffy, preachy, and annoying. They won’t dance. They won’t go to picture shows. And they’re not even accepting of those who do! And yes, I understand why, but it really made me dislike them none-the-less!
Besides, the “ball scenes” were greatly missed, as Mrs. Edmonton points out. I think this (and the overall preachy feel) was my biggest problem.

This was an ARC copy, so I won’t mention typos and such. The writing was good overall, but it was a little too old-fashioned for the 1930s at time.

Sometimes the Christian content (of which there was a lot) seemed thrown in, as if it didn’t really belong. However, I did enjoy Emmeline’s character arc, despite it being rushed and crowded at the end. It was a new and cool way of show her change at the end of the book.

Not a bad book, but not a good one either. I didn’t enjoy it much at all, and probably wouldn’t recommend it to any lover of the ’30s or Jane Austen. However, if you enjoy light historical reads with a little romance (but not much) and a lot of Christianity, this might be the book for you.