Nyssa Glass and the Caper Crisis by H.L. Burke

Nyssa Glass and the Caper Crisis by H.L. Burke 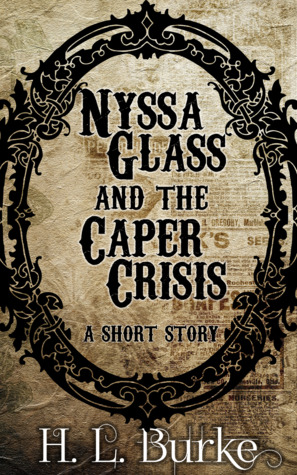 Orphaned cat burglar Nyssa Glass intends to outwit her rotten fate.
“Adopted” by her incarcerated uncle’s gang of thieves, she breaks into homes and picks pockets to repay her family debt and one day buy her freedom from their dark enterprise. Mechanically adept and determined, Nyssa longs to attend Miss Pratchett’s School for Mechanically Minded Maids and make an honest life she can take pride in.
She wasn’t made to steal things. She was made to create and fix them.
However, before she can make her escape, the head of the gang taps her for a new assignment, one her conscience cannot bear. Nyssa is faced with a heartrending decision: sacrifice everything or become the very thing she’s desperate to escape.

That was a short but delightful read! I wasn’t expecting too much from it (short stories aren’t always my favorite, especially prequel short stories), but this was really a cool story.
I liked Nyssa, although as this was a short story, there wasn’t a lot of time for tons of character development. But she still seems like an interesting character – and she was definitely a good person, even though her circumstances forced her to do some bad things.
Mr. Calloway was also very sweet. I really enjoyed reading about him, and I’m excited to see more of him (I think?) in the rest of the series.
There wasn’t time for a lot of world building, so I won’t comment on that. The ending was also a little bit rushed – perhaps even a little hard to understand – but I think we can attribute that to a shortage of space.
As far as content, there was some violence (which any teen should be able to handle; more sensitive middle-graders might not want to read this or to read this with their parents), but no language or sexual content.
Overall, this was an intriguing prequel. I’m looking forward to reading the rest of the series – and especially to see how the author fits all the backstory revealed in this novel in without plot-dumping (if she does).

Have you ever read anything by H.L. Burke? Do you read/enjoy steampunk novels?