The Whimsicals by Mr. Bohemian 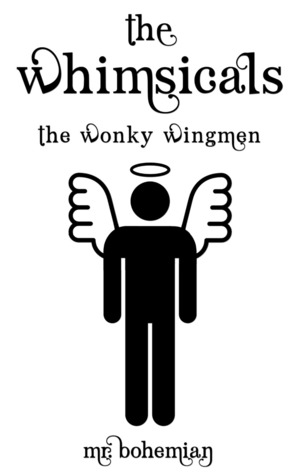 Your guardian angel is tracking your reward points. Do you have enough for a miracle? The angels of Angelix watch over mortals from their computers. From there, they may provide their assigned mortal with what they need, but not often what they want. Is managing mankind not your nine to five? If so, the demons of Daemonix are always accepting applications.

Calling the case of the Children of the Garden versus Demon Sylmalice. The prosecution states that Sylmalice tricked the girl, Eve, into biting a fruit from the Tree of Treachery. The defense argues that ever since “the exeunt” of Lucifer, angels have been actively prejudiced toward demons. Therefore, Demon Sylmalice is innocent by reason of “authenticity,” with mental collapse triggered by systematic social suppression. Angel 12 is on the case.

You are now kruising on Kitty Kloud 9: Where Pets Get Picky! While on the show, angel parents possess the chance to chat with their pets. Is your kitty in a furball with the dog? Is the bird barbarically flicking the fish again? Step lightly with Angel 9 and Mr. Kitty, as they tiptoe through tantrums and bring peace to petkind.

I’ll be reviewing this book a little differently as it is not a novel, but a stage play.
The Whimsicals was quite funny. It had my chuckling several times. I especially enjoyed the first act, Angel Incorporated. Though not even close to an accurate portrayal of how Heaven is probably “run,” it was entertaining and made me think.
The Guilty Gardener was pretty fun, too, but I will say that some of the testimonies were quite confusing and made no sense to me. Overall, though, it was a new way of looking at the Fall, etc.
Kitty Kloud 9 was even more wild. I think it was probably the most humorous. I’d love to see this one performed!
The one negative thing I might say about The Whimsicals is that if a new Christian were to read this and take it seriously, there could be disastrous consequences. However, I believe it would be abundantly clear to anyone with insight that this is not meant to be an account of the truths of Heaven, but rather a ‘wonky’ comedy.

Language: several instances of ‘h*ll,’ not referring to the place. Angels and demons alike use fake swear words.
Violence: mentions of hell, death, destruction, losing souls, etc.
Sexual: n/a
Other: demons, devils, etc. Mentions of all kinds of sins and the (ridiculous but appropriate) punishments the sinners must go through.
For older young adults and adults. Easily enjoyed by Christians and non-Christians alike. Although there are some barbs at atheists.

The Whimsicals in an entertaining – though definitely not to be taken seriously – play in three parts. I’d recommend it to anyone who delights in ridiculous humor.

Do you enjoy reading scripts? Are you a fan of heavenly humor? Or would you find it to irreverent for your taste? What separates silly from sacrilegious?