The Journey by John A. Heldt

And we’re back!
I’m planning on posting Tuesday and Friday from this point forward, although there may occasionally be a post on another day. Especially as I need to catch up on reviews. The hiatus was nice, but it’s good to be back. 🙂
Title: The Journey
Author: John A. Heldt
Series: Northwest Passage, #2
Genre: Science Fiction (time travel romance/adventure)
Era: contemporary and 1979
Setting: Unionville, Oregon, United States
Publisher: John A. Heldt
Source: from the author (in exchange for an honest review)
Overall Rating: 5/5 stars

THE JOURNEY BY JOHN A. HELDT 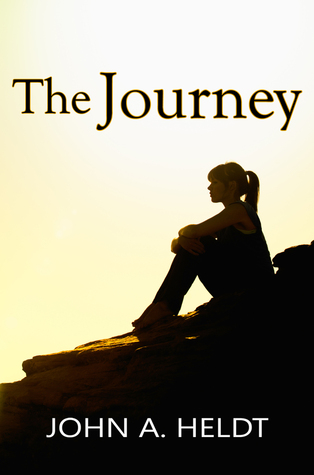 Seattle, 2010. When her entrepreneur husband dies in an accident, Michelle Preston Richardson, 48, finds herself childless and directionless. She yearns for the simpler days of her youth, before she followed her high school sweetheart down a road that led to limitless riches but little fulfillment, and jumps at a chance to reconnect with her past at a class reunion. But when Michelle returns to Unionville, Oregon, and joins three classmates on a spur-of-the-moment tour of an abandoned mansion, she gets more than she asked for. She enters a mysterious room and is thrown back to 1979.
Distraught and destitute, Michelle finds a job as a secretary at Unionville High, where she guides her spirited younger self, Shelly Preston, and childhood friends through their tumultuous senior year. Along the way, she meets widowed teacher Robert Land and finds the love and happiness she had always sought. But that happiness is threatened when history intervenes and Michelle must act quickly to save those she loves from deadly fates. Filled with humor and heartbreak, THE JOURNEY gives new meaning to friendship, courage, and commitment as it follows an unfulfilled soul through her second shot at life.

Wow. That was quite awesome!

Oh, good glory.
I admit I’m not really a ’70s fan. Especially late ’70s. But … you know, I really enjoyed this book a lot more than I thought I would, and that was partially due to the amazing plot.
I did think it was perhaps a little slow to start, but once it got going, it was quite addictive. As I said before, there was a plot twist or two that left me breathless and heartbroken.
And the worst thing was that I was going crazy knowing that it was going to happen and yet wondering how it would not happen and … I’d better stop before I make no sense.
I will say that I find it a bit confusing that, among at the Smith-centered books, there was this random rabbit-trail. I feel like it was meant to be a standalone, not part of the Northwest Passage series.

I felt like the characters well well-developed. I admit I sometimes had a hard time keeping the teens sorted out, but that was only at first; I eventually caught on.
I admired both Michelle and Shelly. It was odd to see how different they were. I guess growing up and living life really does change a person. It made me ask a lot of questions about myself … who I am and who I will be.
I’ve never been so happy about anything in a book as I was about how Scott/Shelly ended up. I was thinking, “YES YES YES!” at the end. The ending was just perfect for Shelly and Brian.
I admit I was a little confused about Robert Land. Wow, he sure gets over his previous romances, doesn’t he? It kind of makes me want to not like him, although he was such a nice man.

I know very little about the late ’70s except what my parents and grandparents have told me, so I don’t have much to say here. This isn’t an era I’ve done a lot of research on, mostly because it’s near-modern-ness doesn’t appeal to me. (And yes, I’m a crazy who calls an era thirty years before I was born to be “near-modern;” I live in the Victorian era; ignore my oddness.)
However, I do feel like Unionville of the day was represented well. I’m not at all an expert on the subject, though.

I say this for all of Heldt’s books, but his writing style is fun and engaging. It’s an odd mixture of matter-of-fact and humorous. His descriptions are particularly fun.

Language: some language including several instances of d*mn, oh my g*d, etc.
Violence: n/a (that I can remember)
Sexual: several scenes involving teens making out in cars (SAAAAANDDDDDDDDYYYYY), none too detailed. A couple times it’s implied that (unmarried) couples may acted immorally or something like that.
Other: a suspenseful scene including the eruption of Mt. St. Helens. Some drinking and drunkenness.
Though I would recommend this book for older teens (say 15+, 14+ for mature readers), it was fairly clean. The thing I’d worry about would be the sexual content, though it didn’t go too far. Most older young adults should be able to handle it.

Wow, again! Definitely one of those books that I’d want to read again. As I said, sad, but still uplifting and hopeful.

John A. Heldt is the author of the critically acclaimed Northwest Passage and American Journey series. The former reference librarian and award-winning sportswriter has loved getting subjects and verbs to agree since writing book reports on baseball heroes in grade school. A graduate of the University of Oregon and the University of Iowa, Heldt is an avid fisherman, sports fan, home brewer, and reader of thrillers and historical fiction. When not sending contemporary characters to the not-so-distant past, he weighs in on literature and life at johnheldt.blogspot.com.

Ever read a John A. Heldt book? Do you enjoy time travel novels? What are your thoughts on this genre? What do you think about series whose books don’t connect?