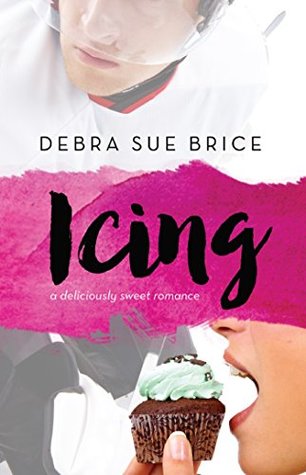 Some people can only dream of living out their fantasies. Cupcake shop owner Denie Shaw is the exception to the rule. This young, witty and charming woman seems to have a perfectly balanced life.

Years of making bad relationship decisions had given Denie, owner of Icing, the opportunity not only to become a strong, successful business woman, but also managed to involve her three best friends in her crazy cupcake adventures.

Denie’s sweet life gets turned upside down when she meets her crush, Tom Billingsly, right wing for the Cleveland Monsters hockey team. Together, Denie and Tom strike up a relationship that seems to have all the right ingredients.

Will Denie allow the fear of heartache to guide her choice, or will she take the leap of faith and trust God to provide a solid recipe for her life?

I really wanted to like this book. I did everything in my power to do so. And I’m going to try to be as kind as I can because I don’t want to hurt anyone’s feelings. I suppose, for the most part, you could just say it wasn’t “my thing.” I don’t read a lot of contemporary romance, so perhaps this is how they all are.

For those of you who follow me on Goodreads and read my ranty status updates, you can guess that I wasn’t a huge fan.
And … I wasn’t.
I found the story to be painfully slow. I skimmed the latter half of the book, skipping pages of Denie’s annoying introspection.
I didn’t particularly like how Denie, the main character, was willing to date a man she’d just met, especially as she didn’t know whether he was a Christian or not (whilst still professing a strong faith). She never really seemed to sit down with him and have a serious, “This is what I believe and if you don’t like it, you can hit the road,” conversation with him, either.
Also:
“Saying you ‘need time to figure things out’ is the equivalent of saying, ‘I’m not going to have a relationship with you.’ You can’t ‘figure things out’ in a relationship if you won’t even see the other person.”
Because I couldn’t think of a better way to say this than how I said this in my original update.
Spoilers!
Then the cliche with Denie assuming that he’s cheating on her when it’s really his relative who he was just hanging out with. It’s one of my personal pet peeves. No reflection on the book, though. Just something that bore mentioning.
End of spoilers!

I give them 2/5 because they started out good and were fairly well developed. Originally, I liked Denie. She was an interesting character who, in some ways, reminded me of myself.
However … Denie was just not a character I ended up liking. She overthought everything, and I soon got tired of her irrational fears, especially as they were rehashed at least five times each. She just was an annoying character. I felt as if she was closer to sixteen than in her late twenties.
Tom … well, originally I liked him. However, he turned out to be selfish and jerky, which, of course, I didn’t tolerate. Then there was this:
Spoilers!
Denie essentially tells Tom that it’s okay that he’s had sex with other women and it’s “none of her business.” What the what?! DENIE! Not okay, girl!
Then, after Tom is jerky to her, basically abandoning her without a word, she just forgives him. “Oh, you had a good reason for being a perfect idiot? ‘Kay. Let’s kiss.”
End of spoilers!
I did like Denie’s friends. They were cool.
But was anyone else just a little weirded out by Tom being younger than Denie? Nope? Just me? Mmkay … (Yes, I do realize this is an immature statement, but I don’t care. *curls up in ball of pouty teenagerness* *is naive*)

I felt that this was really well done. It being a contemporary novel, there’s not much to comment on in this area. I’ve never been to Cleveland (or even Ohio … or anywhere near Ohio), and I felt that I really got to know the city.

At first, it was amusing, but

Language: n/a
Violence: n/a
Sexual: some kissing, breathlessness and all those other “falling-in-love” emotions, Tom tells Denie he’s “been with other women,” Denie worries that Tom is a bad boy, has a different girl every night, etc. (And since Denie worries a lot, we get a lot of thoughts about this.)
Other: n/a (that I can think of)
It was overall very clean with no language or violence. However, I wouldn’t recommend it for younger teens. Maybe 14+ if you’re mature. It’s really meant more for adults.

Just not a fan. It wasn’t a terrible book, but it wasn’t really my thing, and I found myself not liking the characters or agreeing with their choices, which is something I can’t stand in books. 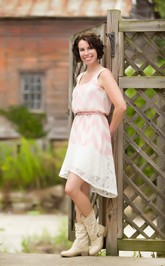 Debra Sue Brice lives in Ohio with her competitive show horses and a kitchen full of desserts. Her fictional characters closely follow the real life adventures of her and her best friends. When not riding, writing, or baking, Debra Sue is a first grade teacher and loves spending time with her family.

Have you ever played hockey? (I’ve never even ice-skated, though I want to!) Do you like cupcakes? Would you like to try weird and wacky flavors of cupcakes? (I would!)