When Christian Fiction Is Ungodly

Note: this post is kinda along the lines of a Reading Rant, but not exactly.

When you saw “graphic” and “Christian fiction” in the same title, you probably either laughed or winced.
Seriously, though, ladies and gents, you know I hate writing negative reviews … especially negative reviews based on content. You see, I feel unfair giving a book a bad review just ’cause it was worldly.
I mean, seriously. Can I really expect non-Christian authors to write clean books?
However, when it’s a Christian fiction book, I get quite angry. I huff and I puff. Christians should abide by God’s rules for the things we think on (whatsoever things are good, pure, noble, just, lovely, and of good report; if there is any virtue and if there is anything praiseworthy), and when they don’t, it upsets me.

I’m sorry, but that’s the way I feel, and whoever thinks otherwise … well, come on, peoples, how can you! God said to keep your mind off those things. I’m not saying don’t be knowledgeable about the sins of the world; I’m saying don’t obsess over it. Don’t be graphic.
The truth is, I love books with the tough subjects … if done well. Incredibly sticky things – rape, adultery, etc. – can be portrayed in a Christlike manner without undue details. And a Christlike portrayal is a beautiful thing.
But when we get the gory details …? Oh, let’s not even go there.

In the following book, there was graphicness that just wasn’t necessary AND it was appropriate for any audiences under 18 (which was so disappointing considering the genre, Christian Historical Romance). (This is my way of reviewing it and making my ranting about the content purposeful.) 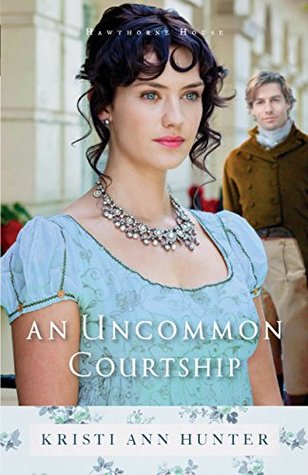 Life for Lady Adelaide Bell was easier if she hid in her older sister’s shadow–which worked until her sister got married. Even with the pressure of her socially ambitious mother, the last thing she expected was a marriage of convenience to save her previously spotless reputation.

Lord Trent Hawthorne couldn’t be happier that he is not the duke in the family. He’s free to manage his small estate and take his time discovering the life he wants to lead, which includes grand plans of wooing and falling in love with the woman of his choice. When he finds himself honor bound to marry a woman he doesn’t know, his dream of a marriage like his parents’ seems lost forever.

Already starting their marriage on shaky ground, can Adelaide and Trent’s relationship survive the pressures of London society?

Having worshipped the ground books 1 and 2 walked on, I was deeply disappointed to find this amount of sexual content in a Christian fiction book.
When I first read that it was an arranged marriage book, my warning lights went off … but I decided to read it. Books 1 and 2 were amazing; the author had written sweet, Christian romances with adorable characters, and I longed to see Trent’s story. I trusted Hunter. I really did.
Then … disaster struck.
As my fellow reviewer Hannah said, it was, in a word, “awkward” and could easily be classified as a steamy romance in my book (of … definitions of what makes a steamy romance … I guess …). It reads like a secular romance, and the plot wasn’t well-conceived at all. I won’t talk about the plot defects, though; other reviewers have in detail, I’m sure. I’ll just talk about the content because that’s what most concerns me and this post.
At first, Trent and Adelaide didn’t sleep together, as always happens in arranged marriage romances for some reason (can you say unrealistic? It’s the early 1800s; stop acting like marrying without love was uncommon!), and of course they think about this and are awkward all. the. time.
This was almost enough to make me put the book down, but I hoped they’d get past this and build a real relationship based on something more than mutual awkwardness. I’d seen it happen in a couple arranged marriage books before.
They never did.
When they finally do sleep together, we pretty much know every detail. No, Hunter didn’t give us the actual “scene” … but there were passionate kisses (including tongues and all that stuff that NO. I DO NOT WANT TO READ AT ALL EWWW) and undressing. It was incredibly uncomfortable and just disgusting. It wasn’t that it was wrong; they were married after all. It was just that I never want to read about that. At all. Ever. *shivers*
Later on, we hear that Trent enjoyed it; Adelaide did not. OH. MY. WORD. May I shoot myself repeatedly in the head? What part of the brain stores memories of books read? Take that part out!
That alone in my eyes makes it a very “steamy” romance, especially as it was Christian fiction.
This was pretty awful in and of itself. However, then for 100 pages or so afterwards, Trent reflects on this night (as it was apparently an epic fail? WHY WHY WHY?! WHAT PART OF PRIVATE RELATIONSHIP DIDN’T YOU UNDERSTAND BUDDY?!), talks to his friends about this night (including asking their advice) and on and on and on about how worried he is about this, etc. He even reflects that sex is painful for women at one point! I. CAN. NOT. BELIEVE. THIS.
For the content alone, the book was getting two stars. Because of it being a bad book to top it all off, with a plot full of holes and characters who weren’t likable, it gets 1.5. The .5 is because I love the Hawthornes.
I just don’t know how this could have happened. Never has a book disappointed me in such a big way. I’m sorry, but I can’t sit still and shut up. I’m too mad. This was wrong. Market it as secular fiction. I don’t care. Just don’t hand me a book and say “to God be the glory” and then write that kind of thing in it.

As you can see, I have a very low opinion of books that give details about sexual relationships. That isn’t the only content problem that’s bothering Christian fiction readers, but it’s high on the list.
(No, there’s not an actual list. There should be, but there isn’t.)
The truth is …
Any subject can be dealt with in a godly manner.
Anything.
After all, God never hesitated to talk about sins of all types in the Bible. Can we do any less in our books (whilst being careful of our audience, of course)? However, you’ll notice that God treats sin in a certain way. What is that way?
The answer is … He gives you only the details you need to understand the situation.
Why can’t we do the same? Not necessarily to the same extent – the Bible just states the facts and moves on, as it’s not a fiction story and therefore doesn’t go into emotions, thoughts, or other details about its real life characters.
But … can’t we Christian fiction authors be Christlike in our fiction?

What are your thoughts on this difficult subject? What books have disappointed you because of content (if any)? What makes you stop reading a book?

This site and its contents copyright © 2018-2023, Kellyn Roth, Wild Blue Wonder Press.
Design by Kellyn Roth.
GOING SOMEWHERE?
Why Writers Should Be BloggersKell's Blog
Two Years and a DayKell's Blog
%d bloggers like this: