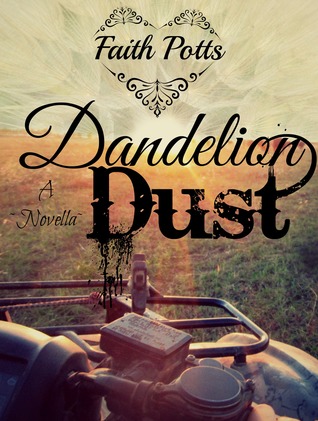 Charity always had a dream. It was simple, really. Find a guy, fall in love, and get married.

The day she met Ryder, Charity knew he was the man God had chosen for her. But she never expected their relationship to be tested and tried through the fires of a freak accident. Suddenly, her world is thrown into chaos, and the bleak, white walls and sterile smells of a city hospital fill every spare minute. And then there comes the dreaded news. It was likely Ryder would never make it out of the hospital bed.

As her carefully laid plans for the future come crashing down around her and the sun seems to set on her dreams, can Charity still find hope in the dark of night?

Buy on Lulu ~ Add on Goodreads

I don’t usually read Christian Contemporary, but I’m glad I made an exception for Dandelion Dust. It was a pretty good book, much as all the rave reviews before me have stated, and I enjoyed it. Finished it up pretty quickly … and I’ve been slow with reading lately!
(Just a completely unrelated note, but there’s been so many books with the word ‘dandelion’ in the title recently. Come on, authors!)

For the most part, I liked the plot and felt that it was well-done. I did have a couple issues, though they’re minor ones (and have more to do with me than with the book … but then the reader is half of the story, right?).
(SPOILERS FOLLOW)
First …
During this book, as the blurb indicates, Charity’s boyfriend Ryder is badly injured in an ATV accident. He’s in a coma for weeks on end.
But, after several weeks of not knowing whether he’s going to live or die … Ryder wakes up. You’d think his family and girlfriend would rejoice. Wrong.
Ryder is crippled from the waist down, yes, but that doesn’t change the fact that HE’S ALIVE. I was furious when the reaction of his loved ones was so dramatic. Who cares if he’s crippled? HE. IS. ALIVE. GOD SAVED HIS LIFE MIRACULOUSLY. Nothing. Else. Matters. But. Life.
He’s not dead. He’s with us still. And in the modern world, legs aren’t as important as they used to be anyway. So … that just made me mad.
(END OF SPOILERS)
Second, the last couple chapters were kind of slow and did a lot of summarizing-of-time which, though necessary, is not my favorite thing. But I suppose it had to happen.
There were a lot of positives, though! I found it both intensely interesting and heartbreaking. It kept my attention and had me hanging on the next word for much of the book. So yes, you should read it, despite my little rants. I may go on and on about what’s wrong with a book and then love it, you know. That’s just how I roll …
(MORE SPOILERS)
This is a personal thing and not related to the book at all, but …
I hate promise rings. I’m sorry. I just think they’re the dumbest things on the planet. Never have I hated anything so much as I hate promise rings. “I promise that someday I will promise to marry you.” Like, what? It’s like the way to commit without committing at all. It reminds me of three-year-olds who say they’re going to marry each other when they grow up.
(END OF SPOILERS)

Uh … don’t shoot me, but I didn’t emotionally connect to any of the characters. I liked them okay, yes, but I just didn’t love them.

And … since they didn’t really stand out to me in a big way, I don’t have much to say here. I do feel that they were well-developed and the author took time with them. The fault lies with me.

Contemporary isn’t my usual genre. Most of the time I dislike books set in the real, modern world. This one was well-done, though. Really good.

Extremely well-written. Definitely made the book that much better! Charity’s voice (through Faith) was quite incredible. Very enjoyable, gave the book a special & original flare.

Language: n/a
Violence: Ryder is almost killed in an ATV accident. Some details, although it’s never actually described. Some hospital stuff, nothing gory or scary.
Sexual: I think Ryder and Charity kiss a couple times, but no details.
Other: There are hospitals throughout this book. Hospitals are scary. *shivers* I hate hospitals …
Okay for all young adult readers. Easily-frightened readers -12 cautioned for scary and stressful situations.

A sweet but sad (and then hopeful) Christian book. Definitely worth reading for lovers of Christian Contemporary!

Have you read this book? Do you enjoy Christian Contemporary? Have you ever driven an ATV? I haven’t, and now I know I never will be … just kidding. Like that’s gonna stop me the first time I get a chance! 😛

This site and its contents copyright © 2018-2020, Kellyn Roth, Wild Blue Wonder Press.
Design by Kellyn Roth.
GOING SOMEWHERE?
0
September 2017 Spotlight: My Obsession with Personality TypesKell's Blog
Writing Plans: Why They Can Be DisastrousKell's Blog
%d bloggers like this: