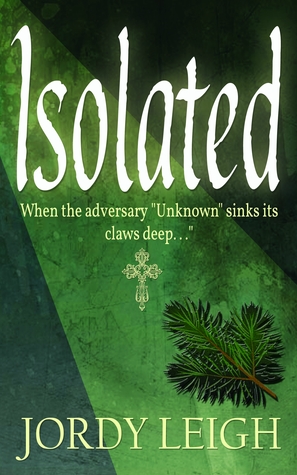 Fourteen-year-old Louise Stella flees into the forest to escape an intruder who would take her hostage. But by the time she returns to her house, her country has broken out in war and her home island has become a military base. Sharing the land with enemy soldiers, Louise’s only goal is to stay alive one day at a time. Having no food or water, and little knowledge of how to survive in the forests of Quebec, her biggest adversary is “the Unknown”. Her pride crumbles and she realizes that she can’t sustain herself. She must depend on someone else… but Who?
Isolated is a Young Adult suspense novella with uncertainty lurking at every turn. It will have you asking the big questions about life and death. Will you come to the same conclusion as Louise?

This is going to be a fairly short review as it was a fairly short story, and I’ve waited far too long to review it. As you know, I originally talked about it during the blog tour, and I meant to review it shortly after, but … *coughs* Oh, well.
Isolated is an intense, content-packed book. It’s very thrilling and leaves you with a sense of imminent danger as well as containing an important message.
Isolated fulfilled both my need for excitement … and my need for a book with an actual meaning (especially as I tend to read a lot of “fluff”). I also identified with the main character – raised in a Christian family, but needing to find a personal faith of her own.
I was a little irritated with Louise’s stubbornness, but only because I see it so strongly reflected in myself , and that was just annoying. Because reading about yourself is infuriating.
However, it was an amazing story nonetheless. I’d recommend it to any Christian teen looking for an intense story with an even more intense message.

From as young as seven years old, Jordy Leigh filled exercise booklets with stories until her hand hurt. She loves a good book, but ultimately she hopes that hers will offer something of greater value than short-lived entertainment. In reading them, may you learn more about the God of the Bible.
Jordy Leigh hopes that Isolated will at once quench your desire for compelling fiction and nourish your soul with wholesome truth.
Go to the author’s website

Do you read a lot of adventure stories? Christian fiction? Do you like strong Christian themes? How would you survive in the wilderness?