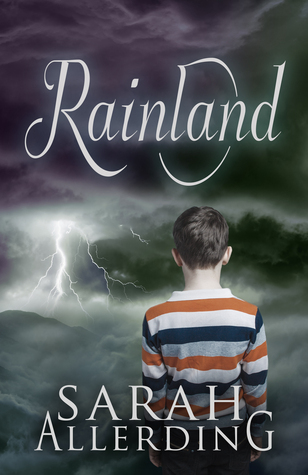 When Thomas gets caught in a summer storm, he is sucked into the world of raindrops through a tornado. He learns he will not be allowed to return until he can defeat the lightning, which has been hurling raindrops from the clouds. Many adventures await him in this strange land. Is everything just as the raindrops say it will be? Is it the lightning they need to defend themselves against, or is there a much greater foe behind the disturbing disappearances?

What a darling little story! Sweet and captivating. I can imagine my younger self falling in love with it – and even as an older ‘child,’ I adored Rainland.

One thing I love about children’s fiction is that it’s not necessarily “complicated.” Throughout the story, I was just going, “Ugh, when is my mind going to be boggled by lots of details that I’ll have to sort through and understand?” And then it never happened, and it made me so happy. Simple is better.

At first, I found it a little slow – especially as I was struggling to get myself to just enjoy the made-up world and stop thinking about the logistics, haha. But … once I did, I really enjoy it! It was fast-paced – but not rushed – and interesting.
I felt that it all progressed well, and it was definitely exciting!

Thomas was an amazing protagonist. And, thank goodness, he wasn’t annoying or perfect (as many middle-grade characters seem to be for whatever reason). He was a strong guy with some faults, an individual personality, and a whole lot of common sense – something I really appreciated.
Drip was a sweetheart. <3 He reminded me of some little kids I know, and it was just adorable. He was so enthusiastic and cheerful!

As I mentioned before, at first I was a little concerned about the logistics behind this whole story. A whole kingdom up in the sky where raindrops, lightning, and fire are all beings? And the fire is trying to take over the kingdoms, and …? I was stuck trying to figure it out!
However, once I just let myself relax and have fun with it, I really enjoyed the setting. It’s really a cool, intriguing idea.

Very well-done. I enjoyed the author’s style. The only thing I’d say is that there was a little less description of the area than I would have liked, so I was sometimes a bit foggy on what things looked like.
However, it is a children’s story, and I wouldn’t expect, say, an eight-year-old to sit through much description, so that’s probably a good thing.

Language: n/a
Violence: nothing graphic, but there was an on-going battle between the Raindrops and the Fire-people, and Raindrops were being released into the water cycle as a punishment while Lightnings were being kept prisoners by the Fire-people. No blood/gore/anything gruesome, and it wasn’t really scary.
Sexual: n/a
Other: a couple scenes were a bit suspenseful, but nothing truly scary
Perfectly clean. All right for all ages. Not too scary for little ones, either. Probably best for ages 8-12.

Rainland is an adorable story I wouldn’t hesitate to give to any child aged 8-12 … and I’d recommend it to older readers, too! Squeaky clean with an exciting adventure-story and interesting characters and setting, it’s definitely one of my favorites in this genre.

Do you enjoy children’s fiction? How about children’s fiction about small boys who accidentally get sucked up into the clouds and decide to help some raindrops and lighting bolts fight flames?  Do you prefer rain or sun? (I’m a rain girl meself!)