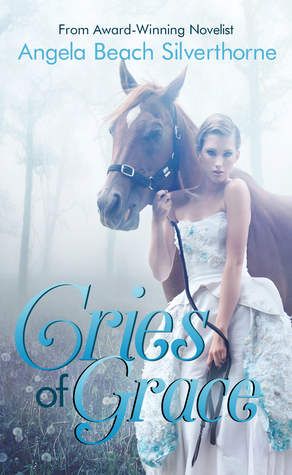 The Haven has enjoyed five years of peace after a brutal demonic assault. The land has flourished. People have moved on, reaping a treasure house of blessings and getting comfortable and complacent.

Bren has been away for five years. Now she heads home with a Master’s degree in nursing, hoping to follow her grandmother’s passion as a midwife. Going home holds deep-rooted issues. She must face the death of her grandmother, her father’s involvement in demonic activity, and bitter disappointments.

Going home also means seeing Joseph. Through brief visits, phone calls, and letters, Bren has fallen in love with Joseph. She is indebted to him for helping restore The Haven to its former glory, but she wants more. She wants her love reciprocated to the fullest.
Going home might mean more hurt, more brokenness, but it also might mean love and passion, sharing a future with the man of her dreams.

Cries of Grace weaves a beautiful tale of romance, redemption, faith, and trust, but in the background things are shifting—mistrust, deceit, and corruption begin to slip in and insidiously corrode hope.

I’m trying to be honest in this review without being cruel or exaggerating in any way. Perhaps it’s not my thing – perhaps it’s my fault more than the books. However, I did not like it, despite it having some redeemable qualities.
Out of respect for the author, clearly a talented wordsmith and a strong woman in Christ, I’ll try to be brief and list only the most important of my concerns.

There was no plot that I detected.
Perhaps I missed the point, but I truly felt that nothing happened throughout the book. It was all anticipation with no pay-off.
It was basically a narrative of a part of a woman’s life in which everything goes perfectly for her and there is no conflict except that she has some ominous feelings which I much assume come to fruition in book 3. (As well as some minor unresolved plot lines.)
It felt like an extremely long epilogue to book 1, but as I haven’t read book 1, I wasn’t looking for an epilogue – especially one that is 396 pages long!
There was lots of description of everyday tasks, lots of over the top emotions, and lots of drama for no reason whatsoever.

There were lots of them – so many that I had no hope of keeping track of them all. I assume this would be different if I had read Book 1, so I won’t criticize there. Ones that were supposed to be endearing annoyed me, and I didn’t like the main characters.
Bren didn’t seem to change during the course of the story much – if she did, it was extremely vague. I just didn’t see a character arc for her. She was ridden with doubts, she was a whiner and a worrywort, and she made several unwise decisions. I doubt her trust in God. She doesn’t seem to be able to maintain trust in Him for any length of time.
Also, Joseph was way too perfect. Doesn’t seem to have any faults as far as I can tell. And I didn’t like him – but not because he was too perfect; just because I didn’t.
Then … there was this.
Despite all their noble intentions and such, Bren and Joseph just couldn’t keep their hands off each other. I’ll talk about this more in the content section, but their constant lust for each other was quite irritating and distracting. It seemed like such a huge part of their relationship. It was distracting and even a little disgusting.
Don’t get me wrong: it’s natural to feel desire for your future spouse – and you should! But that doesn’t mean you shouldn’t be careful not to let yourself get carried away before you’re married. And … they frankly got so close to sleeping together sooo many times!
It never occurs to them to seek counseling and guidance from those close to them who might have dealed with this themselves. It doesn’t even occur to them that repeatedly being alone – most of the time at Joseph’s house – is a bad idea. Nor is frequent passionate kissing a bad idea, apparently.
I do realize that they managed to keep out of each other’s beds until they were married. Hooray for them. But that doesn’t change the fact that they took dozens of unnecessary risks. At one point, Bren even begs Joseph to sleep with her. If Joseph hasn’t remembered that he was a priest (also, why does this matter? Priests don’t have to sin less than other people!), it would be “Good-bye, God’s rules!”
My insignificant pet peeve:
Does anyone really cry as much as the characters in this book? Something happy happens, they sob. Something sad happens, they sob. Something somewhere-in-the-middle happens, they sob. It was quite annoying for me, a girl who doesn’t cry or appreciate emotion.
I can definitely see a few characters being teary – and that’s good – but all? Not every cries that much. Nor should everyone. (Not to say that tears are a shame, but that not everyone expresses emotion in the exact. same. way.)

I wasn’t really sure where we were in the United States or if this was supposed to be set in modern-day America, but the description was beautiful done if a little excessive at times. The culture was also well-done.

Other than the description, which I felt was a little overdone, and the semi-melodramatic and exaggerated nature of the book, the writing was beautiful. It was true craftmanship. I applaud the author.

Language: n/a
Violence: n/a (that I can remember)
Sexual: mentions of rape, sexual abuse, etc. which different characters have had to go through in the past. Bren works with lots of pregnant, unmarried teens and such. A semi-main character has a child out of wedlock.
As I said before, Bren and Joseph were always lusting after each other. There was lots of talk about this. They also kissed passionately many times and almost took it too far at least twice. More talk about this in the Plot section.
At the end, there is a borderline sex scene with Bren and Joseph. I won’t go into details, but let’s just say it was completely inappropriate even though they were married. Aside from my convictions about scenes not being included in books because of the sanctity of marriage, it made it sound like their world revolves around sex. They’re gonna have a great marriage …
Other: mentions of demons, demonic activity, etc., but to mostly seemed to be speculation. Characters are in jail though I don’t know why.
Parental guidance suggested for all teens. Best for 18+ or rather married women.

For all the above reasons, I didn’t like this book at all. The only positives were the beautiful writing and the Christian themes.

Angela Beach Silverthorne is the co-author of the award-winning novel, Depression Cookies, and author of a poetry book, Promises Seeded Inside. Her short stories and poetry have been featured in numerous magazines and websites. She is currently writing Cries of Mercy. Angela and her husband of 47 years, Dallas, live in Virginia Beach, Virginia with their Boston terrier, Miss Lillie. They are the parents of three daughters and have nine grandchildren who often beg her to tell them “one more story.” She has a special place in her heart for women who are victims of abuse, brokenness, insecurity, and self-doubt.