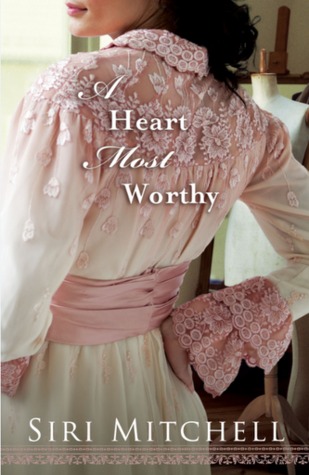 On the eve of World War I, three Italian immigrants dream of love, but each harbors a secret that could destroy any hope of happily ever after.

The elegance of Madame Forza’s gown shop is a far cry from the downtrodden North End of Boston. Yet each day Julietta, Annamaria, and Luciana enter the world of the upper class, working on finery for the elite in society. The three beauties each long to break free of their obligations and embrace the American dream—and their chance for love. But the ways of the heart are difficult to discern at times.

Julietta is drawn to the swarthy, mysterious Angelo. Annamaria has a star-crossed encounter with the grocer’s son, a man from the entirely wrong family. And through no intent of her own, Luciana catches the eye of Billy Quinn, the son of Madame Forza’s most important client. Their destinies intertwined, each harboring a secret from their families and each other, will they be found worthy of the love they seek?

Let’s take a moment to appreciate the cover. (Just so you know, the full cover and the formatting are both amazing! If you can, buy yourself a paperback copy. It’s a decoration as well as a good book.)

Now. Onto the story behind the beautiful cover/formatting.
WOW. Siri Mitchell has been an author I haven’t really loved until now because of the content + her books tend to be unresolved or sad at the end in my limited experience. (I like a happy ending short of GWTW.)
Now, I’ve only read two of her books – but they were the first two in this series (it’s a series you can read in any order, just so you know; not sure why it’s a series at all). And both ended … unsatisfactorily. At least, in my opinion. So … I wasn’t sure what to think of this fourth book in the series.
Well, “against all expectations,” it was the most amazing book I’ve read in a long time!
(I’ve decided to remove the section for this review because I love it so much that I need room to ramble.)
The plot was very interesting! There were three major plotlines – that of each of the girls, Julietta, Annamaria, and Luciana – as well as Madame Forza and Mrs. Quinn.
You’d think that many plotlines would be overwhelming! Well … they weren’t. The author masterfully crafted a beautiful story that fitted perfectly together. It’s been a long time since I’ve read such a tight plot.
I think my favorite plot at the beginning was Annamaria’s. Her struggles with being the eldest daughter – who in Sicilian tradition doesn’t marry, but cares for her parents and siblings – and desiring a home and children more than anything broke my heart.
However, as her story progressed, I found myself getting wrapped up in Luciana’s story. Billy Quinn was a stellar character – and even just he made the story that much better. And then, of course, the whole thing with the assassinator was quite suspenseful.
Julietta, I had very little pity for at first. She was kinda being an idiot … which was the point of the lesson, of course, but it was no-less annoying. I did eventually get to like her, but it wasn’t the same as with Luciana and Annamaria.
At about 50%, I totally called the twist with Madame Forza and Mrs. Quinn. And … I just loved it! It was quite sweet. (SPOILERS AFTER THIS POINT) It was just so sweet, y’know? She was trying to make his marriage better! If I lost my sweetheart to another woman, I’d hope I could do that. (END OF SPOILERS)
Anyway, just beautiful.
The writing style was omniscient, and it’s very rarely you see that done well, without head-hopping or confusion. But this was absolutely beautiful! It was like someone was telling me a true story, sitting right in front of me, and I was completely charmed and swept away by it.
The writing had the simplicity of Eleanor H. Porter, the grittiness of Gene Stratton Porter, and the relatable sweetness of Maud Hart Lovelace with a dash of L.M. Montgomery … along with the author’s own style, of course!
The historical details were amazing! Everything seemed 100% accurate to the best of my knowledge, and I felt sucked into the era and setting. The Boston slums, the upper class, World War I, the Spanish flu … everything was quite amazing.
Overall, it was the kind of novel that I’d read again and again. And I fully intend to!

Language: n/a
Violence: talk about the war, people dying, etc. One of the main character’s father was blown up by a terrorist. The terrorist is in the USA and tries to kill the main character and others and talks about it. Never anything gruesome or violent.

Sexual: one of the characters put herself in compromising situations with a man who wants to sleep with her, leading to fairly detailed kisses and her having to tell him she’s not that kind of girl, essentially. There are a couple (fairly vague) references to sexual relations. Can’t remember anything else. A married woman accuses her husband of having an affair.

Other: the slums are very slummy, thousands of people die from the Spanish flu later on in the book, and it might be a little frightening for younger reader.
Probably 14 or 15+ for sexual content. Definitely a more mature book, but none-the-less awesome for it.

I don’t know how to sum up this amazing book! From the plot to the characters to the setting to the writing, it swept me away. I can’t even begin to say how highly I recommend it to any lover of historical fiction. It was different … but that’s what made it so special!