Heiress by Susan May Warren

The Heiress by Susan May Warren 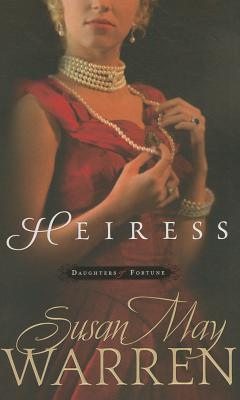 The beautiful heiress daughters of newspaper magnate August Price have been given everything their hearts desire. But what if they want only to be loved–without an enormous price tag attached? When one daughter pursues a desirable marriage, she secures for herself a comfortable and glamorous life. But among the duties of privilege, will she also find the happily-ever-after she seeks? Her sister rejects the trappings of wealth, choosing instead to build a new life on the still-untamed frontier. Will she find happiness in independence or discover that she’s left her heart behind in New York’s glittering society? Set in the opulent world of the Gilded Age, each woman discovers that being an heiress just might cost her everything–including the chance for true love.

I … have absolutely no clue what to think about this book. At all. I’m hopelessly unsure what to say in this review. For this reason, I’m leaving behind my usual format. Here goes.
Now, I’ll admit it right out: I’m a sucker for drama. All the grief and turmoil makes me happy. At times, it may have been a little over the top. You know those books where everything goes perfectly for the characters? Well, this was the exact opposite of those.
This book was all over the place. It was confusing. It was crazy! But at the same time … there was something special and unique about it. It was well-written, the emotions felt authentic, and I was thunderstruck throughout much of it. The characters were well-developed even if they weren’t necessarily likable.
Jinx was terribly flawed and sad and just … miserable. I felt so terrible for her, but at the same time I wanted to shake her until her eyeballs rolled out.
And … I didn’t like Esme at all. She was just waaaay too naïve and idealistic for my taste. I like all-knowing characters. 😉 Seriously, though, I just didn’t like her. Nor do I respect her goals. *blinks* Leave riches behind??? *eyes widen at the very thought* *is mercenary*
I didn’t much care for any of the males in this book – except Esme’s husband. He was pretty sweet. And Teddy Roosevelt made a cameo (!!!), so that was awesome.
Bennett … ugh. I’m sorry. He may have all the noble intentions he wants, but he did the wrong thing and then continued to pursue doing the wrong thing, and I won’t forgive him.
The plot was good throughout most of the book, but several times it made huge skips forward (from three to fifteen years!), and it was a bit confusing. However, I soon caught on in spite of that. (I obviously didn’t enjoy the parts concerning Esme as much as the parts concerning Jinx. They seemed distant and cut off from the rest of the story, the theme, etc.)
So … what am I saying? Well, this: I enjoyed this book greatly, but there were many problems with it. I couldn’t lower the rating past 3.5 because I enjoyed it that much, but it still wasn’t a great book, and probably not one I’d recommend. Call it a guilty pleasure read.

Language: n/a
Violence: a man is abusive of his wife (emotionally and physically). (Actually, several men are abusive of their wives.) Mine accidents, some of which were caused by other mine owners. People are killed or badly injured/mangled in these accidents.
Sexual: an adulterous affair that results in a child. (Actually, like three of those and multiple others that don’t result in children/it’s never confirmed if it did result in children.)
Mentions of people enjoying/not enjoying marital relations. Lots of talk about adultery, etc. The biggest thing that was described in detail was kissing and then the before-and-after of sex, but it was still too much for me, personally. Also, all these characters are just plain immoral. Ugh.
Other: some details about pregnancy, very minimal. Talk about miscarriages, etc. The slummy conditions of the lower-class parts of town are described, and it’s disturbing.
(I may have forgotten something … it’s been a while.)
This was honestly my biggest problem with the story. There was a lot of content, as you can see. I’m tempted to say 18+, but perhaps 15 or 16+ for discerning readers or with parental guidance.
The biggest problem was Jinx’s adulterous affair. At first, I was conflicted – “Okay, so, she was tricked into it …?” – but I soon realized that it was as much her fault as that of the man she cheated with.
At the same time, I couldn’t help but get swept away with these characters. And I know, that’s a form of emotional manipulation, but … it wasn’t that I felt they should sin. The author never treated sins as right.
I just felt bad for all the people in this story who, though not justified for their behavior, were influenced by an upbringing that may seem peachy perfect from the outside – but truly led to their downfall.
And … through that, there was a sort of moral lesson. It’s kind of a cautionary tale – don’t be the Gilded Age because even though it’s shiny, it sucks, even for rich people who you think have it easy.

This site and its contents copyright © 2018-2023, Kellyn Roth, Wild Blue Wonder Press.
Design by Kellyn Roth.
GOING SOMEWHERE?
Are Novels Important?Kell's Blog
The Sea Before Us by Sarah SundinKell's Blog
%d bloggers like this: