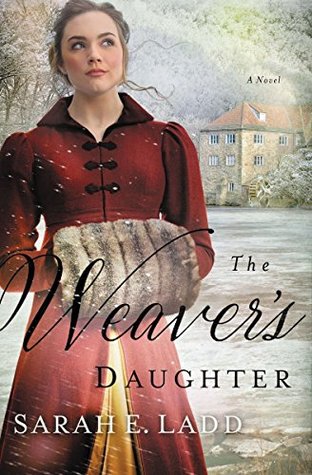 Loyalty has been at the heart of the Dearborne family for as long as Kate can remember, but a war is brewing in their small village, one that has the power to rip families asunder –including her own. As misguided actions are brought to light, she learns how deep her father’s pride and bitterness run, and she begins to wonder if her loyalty is well-placed.

Henry Stockton, heir to the Stockton fortune, returns home from three years at war seeking refuge from his haunting memories. Determined to bury the past, he embraces his grandfather’s goals to modernize his family’s wool mill, regardless of the grumblings from the local weavers. When tragedy strikes shortly after his arrival, Henry must sort truth from suspicion if he is to protect his family’s livelihood and legacy.

Henry has been warned about the Dearborne family. Kate, too, has been advised to stay far away from the Stocktons, but chance meetings continue to bring her to Henry’s side, blurring the jagged lines between loyalty, justice, and truth. Kate ultimately finds herself with the powerful decision that will forever affect her village’s future. As unlikely adversaries, Henry and Kate must come together to find a way to create peace for their families, and their village, and their souls – even if it means risking their hearts in the process.

The Weaver’s Daughter by Sarah E. Ladd is a beyond amazing book with a serious moral issue. That may sound harsh, but that’s the only way to describe it. This review may offend some of y’all, but I’ve got to be truthful about my convictions, so here goes.
I still have some very positive things to say about this book. It was quite well-done. Beautiful writing, interesting setting, intriguing plot, and awesome characters. This book has it all … except that one subplot.
I’m again abandoning my regular format because this is a review that defies structure. I need to be able to talk freely.
It was really a five-star novel. From the tension between the up-and-coming mills and the old-fashioned weavers, to the (forbidden) romance between Kate and Henry, to Kate’s relationship with her father and on and on … beautiful.
It progressed smoothly, kept my attention, had an interesting mystery and a lot of excitement, and was reminiscent of North and South (only I actually like the characters and plot and all a lot better than North and South, shoot me).
Also, am I the only one who is just like: YAY MILLS YAY PROGRESS LET’S BOOT THOSE SLOW WEAVERS OUT OF HERE AND ACTUALLY GET SOME WORK DONE!? Because this is how I feel … 😛
Also, all the weavers are complete jerks. Some of the mill folks are jerks, too, but the weavers were extra special jerks.
The whole setting was so excellent. The description really got me wrapped up in the book, combined with the excellent characters. Henry was my favorite, while Catherine’s brother and Catherine herself ran close second and third. Catherine’s dad was a jerk. #nuffsaid
The only problem was the subplot I mentioned earlier. Now, there are some mild spoilers in this next section, but since they are so mild they probably aren’t even spoilers in some ways, I won’t bother to mark them as such. Also, I hope y’all Christian readers will choose not to read this book, so it doesn’t really matter.
Molly, Henry’s younger sister, got pregnant out of wedlock … and Henry as well as Catherine act like this is perfectly okay (as do all the “good guy” characters).
Molly wants to keep her pregnancy a secret and comes up with a lie to cover up (understandable, considering the fact that she is going to be thrown off the earth once Regency society finds out), but all the characters are vehement that Molly needs to tell the truth.
And once she tells the truth the consequences of her sin (YES I SAID THE S-WORD) will go away?
Her lie is a worse sin that her sleeping with a man while unmarried and conceiving a child by him?
I am just so steamed about this that I’m getting angry again as I type.
Yes, forgiveness is very important … but only if the sinner is repentant. Because that’s what Molly is. A sinner. And I know we’re all sinners … but just ’cause we’re all sinners doesn’t mean that sin is okay.
It’s never okay.
If Molly’s lie wasn’t “a mistake” or “a temporary lapse of judgment,” neither was her fornication. (The pregnancy isn’t really the problem morally, just to clarify; let it never be said that a pregnancy is anything but a gift. Though it might seem like a consequence.)
This entire book treats anyone who judges Molly for her fornication like scum. But … that’s wrong. Judging people is wrong, and no sin is any worse than the other (as far as getting one into Hell and making you need Jesus, that is), but … that doesn’t make sin okay.
Also, even though we don’t have a right to judge anyone, of course, Molly will get judged. All the characters are living in this fantasy world where, if Molly is honest about her sin, then nothing bad will happen.
Er, excuse me? Regency England, anyone? Welcome to the 19th century? Molly is going to suffer for this for the rest of her life. Henry (and everyone) sheltering her from this fact is gonna do her no good.
Nor is acting like everything’s going to be okay, Mr. Protective Big Brother. Dear Henry, your sister cannot just move past this. Sin is never gonna just go away unless you confront it. And though Molly is perhaps very sorry she conceived, even sorry she gave away her virtue, she is definitely not thinking of it on the level of sin.
More like an impropriety or an inconvenience of sorts. But what God thinks is what matters … not what society thinks.
I get where the author was going. She wanted to show that fornication is not a worse sin than any other sin as far as salvation goes – or that’s my best guess.
But you can’t go about that by making lying seem a lot worse than it is and making fornication similar to dropping a plate on the floor. (Which would be a mistake.) (Unless you threw that plate at someone’s head.) (That’s concussioning thy neighbor.) (Or something to that effect.)

Language: n/a
Violence: men are shot and killed or badly wounded, one man murdered in cold blood, others killed during a violent attack on the mill. Some talk about blood, treatment of wounds, etc. A brawl at a public dance leads to many a split lip.
Sexual: a semi-detailed account of childbearing. Molly has a child out of wedlock and this is treated as a ‘temporary lapse of judgment,’ a ‘mistake,’ and a ‘scandal’ but not as sin which it is (see my whole rant ^^). A couple kisses, a bit detailed.
Other: MOLLY LIES HEAVEN FORBID THAT MOLLY LIES OH NO WHAT SHALL WE DO!?!?!?!?! Lies are such a terrible sin … worse than any other, in fact …
Not recommended for readers under sixteen unless they are discerning and won’t be strayed by the confirmation of sin.

I’m sorry, but I cannot and will not recommend this book to any Christian reader. Secular readers might enjoy it, as it is a great (5-star!) book except for the Molly fiasco. But Christian readers shouldn’t allow this kind of thing in their fiction. It’s abominable.