Time for my review of The Accidental Guardian by Mary Connealy! I actually read this book back in May and had so many mixed feelings that I needed some distance.

But in this post, I’ll try to sum up my opinions!

The Accidental Guardian by Mary Connealy 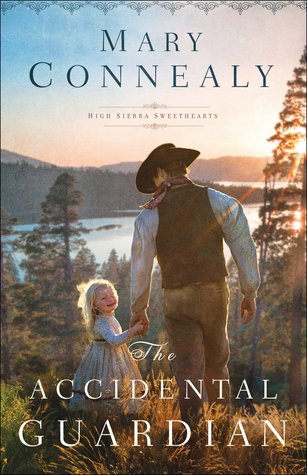 She’s the only witness to a wagon train attack. Keeping her safe, though, means his world is about to be turned upside down.

When Trace Riley finds the smoldering ruins of a small wagon train, he recognizes an attack by the same group who left him as sole survivor years ago. Living off the wilderness since then, he’s finally carved out a home and started a herd–while serving as a self-appointed guardian of the trail. He’d hoped the days of driving off dangerous men were over, but the latest attack shows otherwise.

Deborah Harkness saved her younger sister and two toddlers during the attack, and now finds herself at the mercy of her rescuer. Trace becomes an accidental guardian when he offers the only shelter for miles around and agrees to take them in until they can safely continue their journey. His simple bachelor existence never anticipated kids and women in the picture and their arrival is unsettling–yet enticing.

Trace and Deborah find themselves drawing ever closer as they work together to bring justice to the trail and help the group survive the winter–but every day closer to spring means a day closer to leaving the mountains forever.

The best way to describe this novel: Whoa, that was fast!

Here are my general thoughts:

Well, I don’t like to hear about married folks’ bedroom habits. Not a bit.

But if you make a point to say that both groom and bride are nervous about the wedding night and then just stop talking about it … you kinda make a reader curious?

Two problems with this.

WILL SOMEONE PLEASE SPANK THE SNOT OUT OF THOSE TWO KIDS?!? I know they’re only 2 and like eighteen months, but they are super badly behaved and no one is dealing with it.

There’s nothing more frustrated than an undisciplined child, especially if everyone keeps pretending they’re babies when they’re obviously not …

Things were not wrapped up. I’m sensing they will be in the next book(s) of the series, so that’s all right.

The pacing – perhaps inspired by the brief writing style – was kinda hectic.

I mainly worried for one thing that the hero and heroine barely knew each other and their relationship moved too fast.

I mean, come on, they went from “absolute strangers” to “lovey dovey feelings” just like that! *snaps fingers*

On the other hand, I was super excited to see a romance without hate, lust, or unnecessary complications involved.

I don’t believe that Trace would have survived for several years in the Sierra Nevadas by himself.

Sorry … I just don’t. 😝 Especially since he wasn’t used to the terrain or weather. Or the animals. Or anything about the area at all. Even the plants would have been different.

I might be able to do it … but Trace couldn’t have.

It was pretty cute and it had some fun adventure, but it wasn’t super deep. I don’t know that the themes ever got fully resolved, but they were cool.

I’d recommend The Reluctant Guardian to anyone looking for a quick, easy read that doesn’t go beyond surface level and is conveniently easy in several places.

Sexual: it’s intimated that two married character had sex, but was so vague that it made be squint at it. Not bad content – just not clear at all what happened!

Have you ever read this book and what did you think? Isn’t the cover gorgeous? Are you also immediately in love with books with small children? (probably a marketing trick, but I don’t even care)