The Journey by Alleece Balts {Review}

Well, today I’ve come to a book that I really struggle to review! A part of me liked it … but the other part of me? Not so much.

However, there comes a time in every reviewer’s life when they have to review a novel they’re not quite sure of, and now is that time.

So, without further ado, here’s my (somewhat muddled) review of The Journey by Alleece Balts.

FTC Disclosure: I received this book from the publisher. I was not required to provide a positive review. All thoughts are my own.

Source: received from the publisher

The Journey by Alleece Balts 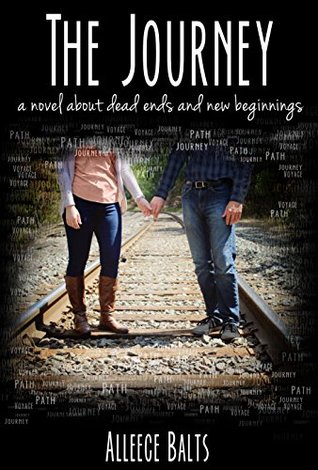 How do you keep moving forward when the path you’re on comes to an end?

At nineteen years old, Ella Parker is a star on the rise. With her vocal training at Juilliard underway, she’s more than prepared for a glittering performance career with the rock band Wicked Youth, and anticipating the prospect of becoming engaged to her billionaire boyfriend… Someday.

But when she collapses on stage during a summer concert and receives a chilling diagnosis, the promise of someday suddenly slips away.

Forced to confront her darkest fears, Ella must not only find the courage to go on after her once certain future has disappeared, but also to track down her runaway friend, Lucas, before time runs out.

More intense and suspenseful than its predecessor, The Journey is an adventure brimming with romance, heartache, hope and grace in seasons of victory and – ultimately – bravery in moments of defeat.

So, it’s time to write the review, despite the fact that I had a hard time rating this book and will doubtless have a hard time reviewing it.

I’m just going to get right into my review of The Journey by Alleece Balts without thinking too much about sense. Because sometimes muddled reviews are needed.

My first thought is simple: it was a great deal longer than it needed to be. There was a lot of stress and tension in this book, but some of it felt quite contrived.

My main concern was the relationship between Ella and Jack. It was, simply, annoying. Or rather, Ella was annoying.

More and more, this girl started to grate on my nerves! It was impossible for me to understand her – and oftentimes even like her.

I felt bad for her, sure, but she was just being stupid! Marry. Him. Already.

It’s that simple. There’s nothing else you need to do.

I believe this may be possibly due to my personality, so I can’t really blame the author, but due to the fact that I’m sharing my opinions of the book – not what others’ opinions should be – I think it requires mentioning.

Which brings me to probably my least-favorite romantic trope – “I can’t marry him because if something were to happen to me [or when something happens to me], he’ll be sad.”

I’m told that this isn’t a universal feeling, but that doesn’t stop me from hating this trope! The way I see it, you ought to be thankful for the days you have – and you ought to use them wisely.

When my grandpa was passing away, our family didn’t react by distancing ourselves because it would be more painful if we became close in those few months.

Nor did Grandpa react by pushing us away because it’d be better for us in the long run.

That would only lead to more pain and regret. It’s a tough situation, I understand, but the right choice is never to push someone away “for their own good.”

Also, I don’t care a bit about Lucas and found Ella’s relentless search for him annoying, but that’s just me again. I just wanted her to let sleeping dogs lie.

My other big negative was the head-hopping. It was quite annoying, as with book 1.

On the upside, I liked Jack a lot. I thought he was the perfect boyfriend, and I really admired him.

I found the parts when they were in Europe quite interested.

The faith content was well-done. It wasn’t really stuff I related to, but other people probably would.

So yes, in summary, I wasn’t as big of a fan of this one as book 1, but a lot of it was just personal preference, not actual problems with the book!

Sexual: some innuendo is thrown about, there’s some kissing

3/5. Not recommended for readers under 15 for romantic elements and innuendo.

Remember to check out the 1K challenge!