The Best of Intentions by Susan Anne Mason (+an important survey!)

Hey y’all! Today I’m going to post a quick review of The Best of Intentions by Susan Anne Mason followed by a quick authory update (because I have newssss!).

Also, I hope to have some more awesome blog posts up later this week! For now, I apologize for not having any particularly awesome. But I hope this book review will be fun!

ALSO … this post contains a survey I’d LOVE to have you answer! Basically, I need your opinion on reviews. 😅😉

FTC Disclosure: I received this book from the publisher through NetGalley. I was not required to provide a positive review. All thoughts are my own.

Title: The Best of Intentions

Source: received from the publisher through NetGalley

The Best of Intentions by Susan Anne Mason 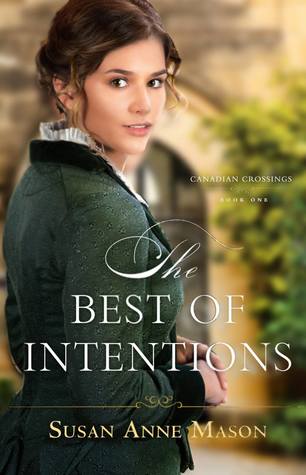 In the aftermath of tragedy, Grace hopes to reclaim her nephew from the relatives who rejected her sister because of her class. Under an alias, she becomes her nephew’s nanny to observe the formidable family up close. Unexpectedly, she begins to fall for the boy’s guardian, who is promised to another. Can Grace protect her nephew . . . and her heart?

Let me just say it was a surprisingly good book! I wasn’t sure what to think going in (having not really paid attention to the blurb, haha), but it ended up packed with heart and awesome.

This is a sweet, clean romance which isn’t too predictable, and that’s something I really value! Christian romances can follow the same pattern, and this one, thankfully, didn’t.

The side plots were also great. I had to love that it wasn’t all focused on one thing as it allowed a lot of variety!

Christian was so sweet! I liked Ginny and Collin a lot, too, and the reverend.

My biggest negative for this story is that the beginning was slow. In addition, the prologue was … awful.

I understand that it was setting up for the next two books in the series now. But I didn’t get that at first.

I thought I was looking for a romance between a certain male character and a certain female, and so I was jolted when a completely DIFFERENT story started in the next chapter!

A lot of it was just … left hanging. It never popped up again. It felt like a complete waste of my time!

So, no, I don’t think it was a good way to tie three otherwise completely unrelated stories together on the author’s part. It was just … confusing. And weird.

2/5. It’s a romance which some parents might not want their younger kids to read, but there’s nothing inappropriate about it.

I sort of launched the covers for this series!

And yes, I realize they leaked … everywhere … but now this is the official release! Sort of!

Much love to my designer, Savannah Jezowski!

Also, I’d like to officially announce the next two books in The Chronicles of Alice and Ivy (formerly titled Alice Unanswered and Only a Mother).

These are NOT final covers, but they are placeholders for now! I hope you enjoy them (and the titles).

And here’s a bit more information on each story!

A Prayer Unanswered has:

Love Once Lost has:

Both of these books will cover a lot of heavier subjects. Most of which I can’t talk about because spoilers!

But suffice to say that, between the two of them, we’ll have everything dark and unsettling.

Miscarriage/losing a baby, all the worries of having a preemie (in an era when it meant death for the child and probable death for the mother), unfaithfulness and betrayal, being rejected by your family, suicidal thoughts, depression, anxiety, mental health … basically, these books will be a lot more PG-13 than my other ones.

And it’s part scary … and part good, you know? I believe God is strongly leading me to discuss these topics with these characters, and He has gifted me with the words to do so.

I am so incredibly blessed – but also intimidated! Yet He gives me what I need to put these thoughts, and His Word, into these stories and these situations!

In case you wonder what I’m working on now!

This survey is to collect information which will hopefully help my review posts be more fun for y’all!

I would really appreciate it if you could take a couple minutes to do this; it’s a huge boon to me! I really want to do my best by y’all as a blogger, but I need feedback to do so!

Did you enjoy the review? How could it have been better? (I know this one was kinda boring, though; I didn’t have a thing to say!)

Did you enjoy my authory updates? Aren’t the covers pretty? (The pro ones, not mine!) Are you excited for A Prayer Unanswered and Love Once Lost? Any predictions/thoughts?

Did you get a chance to fill out the survey? What are your thoughts on reviews? Do you post reviews on your blog? Or elsewhere (e.g. Amazon, Goodreads)?