Well, 2020 was a year that happened. Technically is still happening. And I think, at least according to my 2019 wrapup, I might have cursed it a little?

[W]hen I think about it, at least I know now what I can’t do – and I know that I can weather a storm. Or 50 storms. In fact, y’all are welcome to throw storms at me (please don’t), because I can take ’em as long as God exists! (Which He always will.)

This is what comes of ASKING people to THROW STORMS AT ME. Like, I’m sorry, y’all. I really am. I didn’t mean to curse us.

All joking aside, 2020 has at least been an interesting year (for most) if not a tragic one (for some).

Almost everyone has been laid-off and labelled “non-essential.” Depression and anxiety are sky-rocketing. Suicide rates are rising. Our economy is crashing, our education system has been upturned, and our churches have been closed.

The government has taken unprecedented control of our daily lives, going so far as to restrict constitutionally-secure activities taking place in our own homes. And it’s scary. And all Americans need* to stand up against it.

*It’s no longer an option if you want to continue experiencing any type of personal freedom.

If you protest, you’re selfish because, guess what? These huge things are just “an inconvenience.” And if you say, “It’s more than an inconvenience; it’s literally my entire life being ripped away!” … you’re a conspiracy theorist.

If that’s not gaslighting, I don’t know what is!

But all politics aside, let’s talk about 2021. Let’s talk about the future. And hope. And all that good stuff that no one can take away from us – even if it just means the knowledge that there still is a battle to fight!

Honestly, I could not remember what I was working on all through 2020 … but after scouring my blog, my documents, various update threads, and so on, I think I’ve got a pretty good wrapup going!

I put out the latest drafts of The Dressmaker’s Secret and Ivy Introspective, as well as audiobook versions. (The IvIn audiobook will be coming in the next couple months!) You can check out everything about those here. (Suffice to say, these are my proudest accomplishments!)

At Her Fingertips is … Complicated

After I finished Ivy Introspective (published in July), I turned my sights to book 3, which I’d originally intended to publish this last autumn.

That plainly didn’t come to be as my first rewrites were less than spectacular. About 35k in, I stopped and reevaluated. It just didn’t feel right. I had some unrelated readers (e.g. readers with no previous series experience) read the first couple chapters, and I hit on some issues.

Give or take a few thousand – I think I started TMD earlier, but I’m not sure how much I kept.

25,141 on At Her Fingertips, primarily. Suffice to say I was dealing with a lot this month.

So I wanted to start early and maintain a longer thread of consistent writing time, so I did.

My plan is to keep experimenting with longer periods of consistent, tracked writing. I’ve done a month and a half … how about two months now? And then three?

Can I eventually spend half the year doing NaNoWriMo and half not? Who knows! It’s certainly worth trying.

Look how pretty that is! So basically, I finished The Duke’s Twin, wrote Becoming Miss Knight, and started At Her Fingertips.

I mostly wrote a lot of random stuff?

By that I mean snippets, self-fanfiction, mini short stories. I probably hit 30,000 words on so on all these mini projects, but they were useless, and I shall not count them as part of my word wrapup for this year.

Her Lord’s Book Club is a new thing

In April or May, I had an idea for a series that a friend and I spent a long time plotting out. Basically, they’re Regency-era comedy romances that involve lots of bookishness and misunderstandings and just … goofy stuff. It’ll be great.

I wrote a lot, but not nearly as much as I’d have liked to! At the beginning of this year, I think I wanted to write up the McAllen Brothers series as well as At Her Fingertips and Beyond Her Calling, and that just didn’t happen.

Still, it could’ve been worse, especially since I stopped mid-year and started working on other random projects. *sighs at self*

(Note: I’ll hopefully write a bit more before the year’s out, but I’m not counting those. Because that’d be hard.)

As you can see, I had a lackluster year in many ways. It wasn’t ever quite what I wanted. A lot of things changed that meant my life didn’t have as much growth as I wanted.

I talked a lot in my 2019 wrapup (which is still a post I really enjoyed rereading, by the way) about how my 2019 was just a very rough year for me to live through, and with 2020 having echoed said pattern, I admit to a lot of discouragement.

I feel like I’ve lost my ability to barrel through. In 2018, I was so numb I couldn’t think straight, and in 2019, I was emotionally volatile and just wrecked.

Actually, though, in some ways this set me up well for 2020 because I had gone through enough in my own mind that I was just like, “Eh. Who cares?” (Personal opinion: half of the world hasn’t suffered enough, so they can therefore not take anything. We have a very weak generation here in America, and probably in some other countries that aren’t facing actual issues, and it’s quite sad.) (Like, y’all, kids in the 1940s didn’t have time to be anxious about their test scores because they were literally dying.)

Anyways, all that aside, to quote said wrapup post:

I’m still trying to figure out my 2020, and even then I can’t guarantee it will go that way. If I’ve learned anything from 2019, it’s that NOTHING WILL HAPPEN THE WAY YOU PLAN most of time, so be ready to make the most out of what God gives you instead of whining that, somehow, your plan was better than His.

I admit that I am a bit scared of having another 2019 – an ongoing lifetime of 2019’s. I feel too weak, too tired, too emotionally bankrupt to take another 2019.

But God knows where my limits are, and I trust Him to take me there and no further. If I feel like I’m being taken further than I can go, well, I’m wrong.

Oddly perfect, isn’t it? Honestly, I never referred to it until this month, but it definitely fits! I wish I’d reread it a bit earlier.

I started 2020 not trusting that I would ever be better – emotionally, spiritually.

Yet even at the end of 2019, I had hope points. Little sparkles and shines. At the time, I was dating a guy who I thought was pretty great (turns out, he was like 110% not right for me, which was unexpected, but you have to try certain things to know you don’t like them), so that was encouraging. I also had a plan for my life, which I no longer possess – and I had friends.

I lost a lot of friends in 2020. I lost a lot of my faith for my future – and certainly a lot of my plans. But I also came to gain friends (or, more often, find out who my true friends were!), and I’m learning to be okay with not having set plans because, let’s be honest, when have my plans ever worked? 😉

Mostly, 2020 has been one long stretch of staying strong and following my first instincts. Sometimes I did (I always, always stuck to my guns about the Giant Debacle of 2020, and I’m so glad I took that stand early on) and sometimes I didn’t (it took me a long time to break up with my boyfriend because I didn’t want to give up if I was just having normal “this is a big deal” doubts) (but hindsight thankfully wasn’t 2020 in this case – – seriously, what I mean is that my hindsight was GOOD and made me realize that I dodged a bullet even though I broke up more on instinct than fact).

However, regardless of when I followed my impulses (which perhaps are God-nudges? I’m not sure – it’s so hard to tell!) and when I didn’t, things have worked out.

I’m not really expecting a good year in 2021. I’m not. But I’m not expecting a bad year, either! I’m expecting another year which will have good and bad – and I sure as sun (I mean, people say “hell” but isn’t sun just as sure? Or surer? At least for now? We’re not all surely going to hell, after all …) am not going to label it “good” or “bad” regardless.

So if 2021 is going to be another 2019, I’m not going to flinch. All types of things could happen. What I can control is my reaction and how much I lean on God during these “things,” whatever they are.

So I’m going to stop now and let my 2021 post wait until after the New Year. In the meantime, I wish you all the best, and Merry Christmas! Celebrate however y’all want – I hear jail ain’t so bad. 😉

OKAY NOW I ain’t askin’ how your 2020 went because I’m not a sucker for punishment … instead, let’s talk about God. Isn’t He great? How do you see Him working in your life? (If you don’t, let’s brainstorm, because I bet we can find Him.) How’s the old writing going, assuming you write? Or the reading? Or … whatever?

Also, I’ve noticed I never do reading wrapups anymore, but to be fair, I don’t read a lot. I only read 35 books this year, and though I expect to read a couple more before the year’s up (#Christmasbreak), I still am sad. More reading in 2021, mayhap? 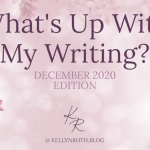 What’s Up With My Writing? (December 2020 Edition)Kell's Blog 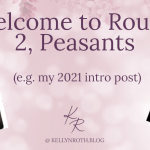