I just wanted to post here really quickly and say … I’ve been blogging for six years.

And for a twenty-year-old, that’s a lot of my life!

This blog has lasted through high school, my first job(s), learning to drive and getting my license, every book launch I’ve done, my first and second/last boyfriends, and my marriage.

I’ve had this blog just a couple years longer than I’ve known my best friend.

I went from never having shared my stories with anyone outside of my dearest friends to having sold thousands of dollars worth of books in paperback, ebook, and audiobook form. On Kindle Unlimited alone, I’ve had a third of a million page reads (which is how I’m counting things at this still-somewhat-early-stage in my career).

I went from having never earned a dollar as an entrepreneur to having mentored writers, worked as a virtual assistant, and helped authors with blog tours, cover designs, and more.

I made and lost dozens of friends. I’ve had people come in and out of my life.

And, though I don’t know how many blog posts I’ve actually published since I’ve deleted dozens of old ones and bad ones and ones that no longer relate to my current topics …

Basically, I know I have way more comments, views, and likes, but, um, I can’t tell you how many. 😉

We have over 1,000 followers, give or take, across various channels.

Since switching over in 2019, the best views EVER were on September 10th, 2020 (I think due to the Growing Writers launch)

Anyways, I’m so excited about this milestone! Last year was obviously a bigger “even number” milestone (5), but this year, at 20, as I look back and realize I was just 14 when I started, well, that’s something special.

What’s a big anniversary you’ve celebrated? For context, depending on what it is, you can view a year or even a month as a big anniversary. Despite the fact that “anniversary” comes from the same root word as “annual” meaning it’s … yearly … 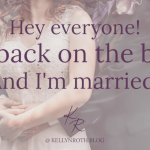 I’m Back On the Blog … And I’m Married!Kell's Blog 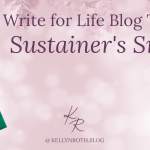