What I Do Have I Give You: a tale of paralyzation and ongoing healing

An Introduction with Random Updates

But today (meaning earlier this week by the time I’m getting this out) my swing broke again, flinging me across the yard, and I wasn’t hurt (except bruised knuckles and a mildly aching wrist), so I’m going to go ahead and use this moment, when I have more than a handful of “thank yous,” to write a blog post.

Matthew and I recently moved—as of late September—and are getting settled in our new cabin home. You can see pictures on Instagram or Facebook, but I’ll try to share some here at some point. But it looks great, and we’re thrilled to be there, even though some parts of it aren’t ideal.

I’m working to make my schedule more doable, and though some of that has been very stressful and will likely continue to be, I’m hoping for the best.

Though my health isn’t great, and though that is a major source of worry for me, I know some practical steps I can take to improve it, and I’m working toward taking them.

I have my puppy now, and he’s cute and sweet and doing fairly well.

Our approval for the state of Washington came through with Matthias (after, you know, a year of trying!), meaning my income from working with him is now just going to be supplemented by his family. It’s a huge blessing for them, of course, but it actually comes with somewhat of a pay raise for me, too! Well, maybe not, after taxes, but it feels like a pay raise.

So I tick off those blessings and hope for more. I have to do that—I’m in a bit of a spiral right now and am struggling to pull out of it. Fortunately, it’s only a personal spiral, and it’s different than ones of the past in that I don’t have to worry about certain things. I’m not suicidal or dangerously depressed, certainly.

However, it’s weighing on me, as things tend to do. I don’t want to freak anyone out—well, I do, but not about this. 😛

What I Actually Want To Talk About

Anyways, all this to say, I have a lot going on—three jobs (for now), lots of book launches, relationship issues, ongoing infertility-ish-but-also-not-because-it-doesn’t-count-as-such, my demon car, and of course work.

On top of that, I suddenly realized I’ve been getting a larger than usual amount of criticism online—from random strangers commenting on my blog and social media to reviews (totally okay—it’s just a thing that happens when one is an author!).

The reviews aren’t a big deal at all—I want to more than clarify that. Also, I can just not read them if I need to. But it’s something I need to consider … that I’m suddenly in a spot, after years and years of relaunching, when I don’t anticipate the feedback. I guess. But I’m never sure.

And frankly, some things have surprised me! Not always in a bad way, but usually at least in a way that made me rethink parts of my stories, even if I eventually wander back to the same conclusion. However, that does take mental space.

But reviews aren’t something I want to talk about on here, except to say that reviewers must review, and some of those reviews SHOULD be negative. If you like everything, then … are you even human?

It’s more the random negative comments that tend to get to me. Especially since lately I’ve had quite a few insults to my general intelligence and ability to communicate from strangers.

Should I ignore it? Absolutely yes. Am I capable of doing so? Yes again. But will I?

However, without causing a lot of trouble, I’ll give you the result of all these varying factors:

I keep getting a little paralyzed.

I’m familiar with the sensation. I have, probably, a form of high-functioning ADHD and tend to hyper-focus and then … not focus.

Yeah, sorry, I’m not going to Google terms just to write a blog post to you heathens.

Though theoretically I know that human beings with opinions and trolls (I’ve had both in excess lately, as per life!) are to be ignored if there’s nothing to gain from engaging with them, that doesn’t mean my brain has gotten the message.

I’ve also found myself having a large amount of doubt and feeling a new to explain myself more than I usually do. I think that’s because my meaning has been misconstrued or not come through more often than not in my communications of late, and as such, I’ve struggled with a desire to alter how I communicate.

But that’s silly. I desire to change and grow but not to change who I am or to force myself to grow in an unnatural way.

Lots of people like me just the way I am—or like the person I’m growing toward in Christ’s image, at least, which is the goal. I don’t really want anyone to like me unless they mean liking the person God created.

All this said, the most recent example I can give you (other than struggles completing outlines and sticking to projects) is with After Our Castle.

I ran two weeks behind on proofreads. TWO. Can you believe it?

Which is really what I want to talk about.

Because I was paralyzed. Unable to finish the darn story. Wondering who wrote this thing. Unsure of how many edits I’d have to make. Believing the worst.

That my story implied things that I didn’t want to imply in the name of sharing the main characters’ beliefs.

That it wouldn’t encourage or help anyone.

That people would come away hating the novel. (I thought this even though some of my most frequent reviewers had already liked it!)

I see this as a bit of an attack from the Devil, but it was also just me freaking out because my brain wasn’t functioning. Sometimes my brain does that—it short circuits. I need to unplug and turn it back on, but I didn’t know how.

I just sat there, reading little bits at a time, doubting my own story, and yet knowing I was weeks from publication. Knowing that I needed to finish it.

Knowing that if I didn’t, it would be just as worse as if I did. Maybe.

But here’s the thing.

God Is Greater Than Paralyzation

We know this because Jesus just healed paralyzed people like it was nothin’. 😉

SO I don’t think I deserved the healing I got because I did nothing. But over the course of last weekend, I made myself finish the proofreads.

The second half went way smoother than the first. I became more confident in what I had written and edited over the last year. I focused in—and I got it done. Then I updated those changes in one (1) evening and uploaded it …

And it went fine. It went just fine.

I ended up not including clarifications. If people read the book and believe Ivy was right in her approach to marriage or Violet was right in … almost anything … I can only say, “You need to read into the subtext.”

I don’t need to explain. That’s not my duty. God is in charge of how these books are received.

And that’s really the change I landed on. Well, not a chance, because I’ve always said this, but a reminder.

I don’t control that. I write the book. I put my best into it, to God’s glory. But I do not form the opinions or the feelings that the book provides. Only God can do that.

Every time I stray from this, I get myself in trouble. I stop resting in God’s plan and start stressing over what potential changes may need made to already published books to help God work more efficiently.

Be gone, spirit of Alice. I don’t need you here.

The book is coming out in just over a week.

Can you believe it?

I’ll be sharing more about the launch plans next Wednesday, but until then, I wish you all the best.

Are you as excited for this launch as I am? 😛 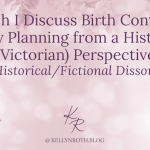 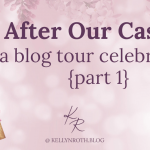